You may recall from my earlier post that I was very excited for the Marissa Meyer signing in Toronto. It's not often that I can make the 2 hour trip to Toronto, so when events are on Saturday afternoon it makes me very happy.

You may also recall that Raincoast Books was hosting a contest for a chance to win a prize pack and an interview with Marissa herself. Now I had a weirdly good feeling about this contest, but I was still incredibly shocked and excited when I got an email last Wednesday saying I had won the interview (!!). When I first heard about the contest I had texted Avery saying "If either of us win the interview we should see if we can do it together" & Avery responded with "YES!!!!", so needless to say I decided I better stick to my word. ;) The people at Raincoast were great, and said that would be no problem. 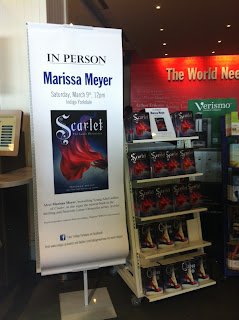 My Mom is a big fan of YA novels herself, and is always willing to play chauffeur in exchange for gas money (thanks Mom!), so she drove Avery and I to Toronto once again. We got to Indigo Yorkdale at about 10:30 and there was already quite a decent line-up circling around the store. Avery and I said hello to the bloggers we saw, and then at about 11:15, Melissa, who was running the event, ushered us to the back room where we waited to interview Marissa. We met with Dan from Raincoast, and said hello to Chandra and Natalie, part of 'Team Teen' at Chapters-Indigo. I received copies of Cinder and Scarlet, Scarlet lip balm, and a Scarlet poster, and they were kind enough to give some lip balm and a poster to Avery as well. Marissa's husband, Jesse, also passed out some 'Captain Thorne' buttons to those of us in the back room. 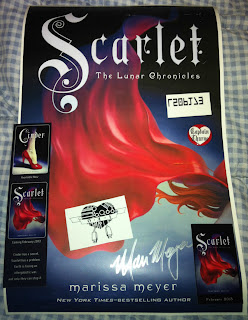 Avery and I went into the green room for our interview with Marissa, and it was tons of fun. I always get a little bit nervous, but as soon as we began talking it was so comfortable. Marissa is very friendly and easy to talk to, and I think it made for a great interview (interview can be found here). After we finished up interviewing, Marissa signed our books and posters, and Jesse was kind enough to take a picture of the three of us. 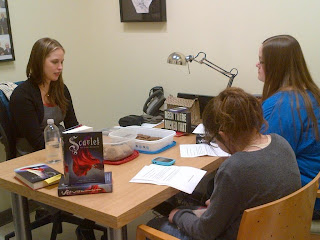 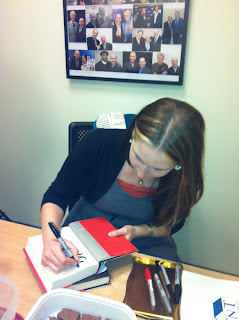 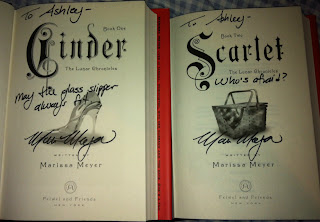 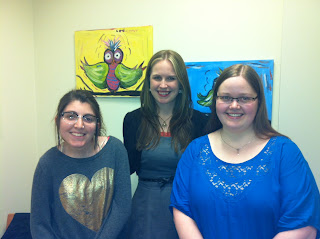 After our interview was complete Avery and I joined my Mom in front row reserved seats (thank you Melissa!), and within a few minutes Marissa came out to the excitement of the crowd. Marissa spoke a bit about her inspiration for Cinder, her publication journey, and then she told us three non-Disney fairy tales (Rapunzel, Cinderella, and Little Red Riding Hood). After that she took questions from the audience.

Here are some interesting facts from the event:


After questions were complete it was time for Marissa to begin signing. Because Avery and I already had our books signed we waited around a bit for some other bloggers, chatting as they finished getting their books signed. Then a group of us headed across the mall for some lunch. It's always so much fun to connect with the Toronto (and Ottawa!) bloggers. 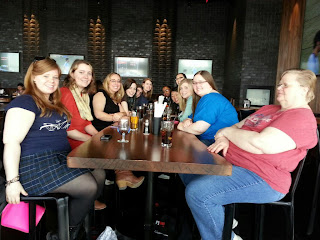 (Photo Credit @justalillost)
All in all it was a fabulous day! Thanks so much to Raincoast Books, Indigo Yorkdale, Indigo Green Room, and, of course, Marissa Meyer for making it happen!

You can read other recaps of the event here (let me know if you'd like your post linked up!):
-- Avery
-- Michele
-- Angel
-- Rose


You can find Avery & my
interview with Marissa HERE.