16 Things I Thought Were True by Janet Gurtler 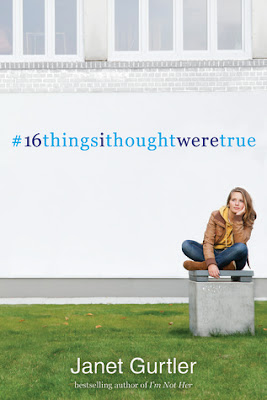 When Morgan's mom gets sick, it's hard not to panic. Without her mother, she would have no one—until she finds out the dad who walked out on her as a baby isn't as far away as she thought...

Now that they have a summer job together, Morgan's getting to know the real Adam, and he's actually pretty sweet...in a nerdy-hot kind of way. He even offers to go with her to find her dad. Road trip, anyone?

5000 Twitter followers are all the friends I need #thingsIthoughtweretrue

With Adam in the back seat, a hyper chatterbox named Amy behind the wheel, and plenty of Cheetos to fuel their trip, Morgan feels ready for anything. She's not expecting a flat tire, a missed ferry, a fake girlfriend...and that these two people she barely knew before the summer started will become the people she can't imagine living without.

My Thoughts:
I tend to enjoy books where the main character changes her mind about the “hero” and that's the case here. Adam starts off as one thing in Morgan’s eyes, but he quickly becomes a great friend: someone who she can trust and tell anything to.

There are real emotions at play in this story, especially when it comes to family issues. Morgan has a lot of feelings about not knowing her father, and she has to face these head on as she decides to confront him. Morgan discovers things about her birth that she didn't know before, and she also has to deal with her complicated feelings toward her mother, who has always treated her differently than her siblings.

There are a lot of great secondary characters in this book. I loved Morgan’s twin brothers, especially Jake. Amy is a larger than life character: she's completely lacking in tact, but she's super loyal and generous, and she added a lot to the book. Morgan is someone I empathized with. She’s dealing with her family issues, but she’s also dealing with the aftermath of something really embarrassing that’s happened to her.

I really enjoyed 16 Things I Thought Were True. It was about friendship and family. It had a road trip aspect, which was both funny and emotional. The brewing romance between Morgan and Adam was sweet: I really enjoyed these two together. There was also an incredibly sad part which almost came out of nowhere, but I think that made it all the more realistic, because we can’t plan for the bad things that happen to us. Overall, another great read from Janet Gurtler.