Illusions of Fate by Kiersten White 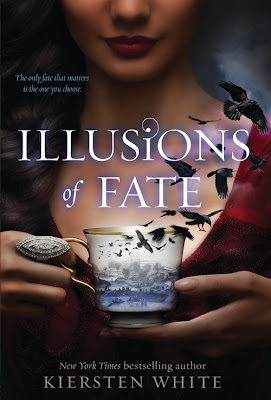 “I did my best to keep you from crossing paths with this world. And I shall do my best to protect you now that you have.”

Jessamin has been an outcast since she moved from her island home of Melei to the dreary country of Albion. Everything changes when she meets Finn, a gorgeous, enigmatic young lord who introduces her to the secret world of Albion’s nobility, a world that has everything Jessamin doesn’t—power, money, status…and magic. But Finn has secrets of his own, dangerous secrets that the vicious Lord Downpike will do anything to possess. Unless Jessamin, armed only with her wits and her determination, can stop him.

Kiersten White captured readers’ hearts with her New York Times bestselling Paranormalcy trilogy and its effortless mix of magic and real-world teenage humor. She returns to that winning combination of wit, charm, and enchantment in Illusions of Fate, a sparkling and romantic new novel perfect for fans of Cassandra Clare, The Madman’s Daughter, and Libba Bray.

My Thoughts:
By now it’s pretty much a guarantee that I’ll enjoy a Kiersten White book, so I was looking forward to this one, especially when it seemed so lush and romantic. It definitely had that feel to it, and I loved the historical aspect of it too, with all the dresses and formal balls, etc. This book has such a depth to it, with a big theme being colonialism. I had no idea this would be a part of the book, and so pervasive, too. I love reading about these types of dialogues, not that I like the situation, but they’re so interesting with the dynamic of the oppressor and the oppressed. I really appreciated what Kiersten included about the oppressed people trying to hang on to their culture, and what happens with that generation of people who were born under a colonial type of rule. What is their identity when they have a cultural background but are raised under another society’s customs?

With all of this going on in the background you might expect a dark book, but it really isn’t. Despite everything bad going on there’s still a light cheerfulness that Kiersten manages to insert into all of her books. One of the bigger aspects of the book is MAGIC, which is a lot of fun. This is centred around Finn, a mysterious figure who turns out to be a handsome lord torn between two cultures himself. I don’t think it’s too much of a spoiler to say that Finn and Jessamin have a sweet romance with an instant kind of connection between them. Considering their relationship is based on a certain kind of fate, it could easily have become a “you’re made for me, it’s fated” type of thing, which I generally dislike, because it means the characters have no agency. I was incredibly pleased when this wasn’t the case. There was a truly sweet courtship and slow connection between Finn and Jessamin, despite the crazy circumstances.

Illusions of Fate is a great book full of magic, friendship, romance, cultural differences, action, and so many other awesome things. I definitely recommend it, and I’m excited to see what comes next from Kiersten White.

The Cover:
I adore it!! So completely gorgeous.