Excerpt of Last Will and Testament by Dahlia Adler

You may have noticed that the blog has been pretty empty lately. I've still been reading like crazy, but I haven't exactly been motivated to blog about those reads. However I definitely had to pop in to promote Dahlia Adler's New Adult debut. I absolutely loved Dahlia's debut YA novel, Behind the Scenes, so I was thrilled to receive an early copy of Last Will and Testament, and I'm equally excited to share an excerpt of that book with you.

First, here's some info about the book: 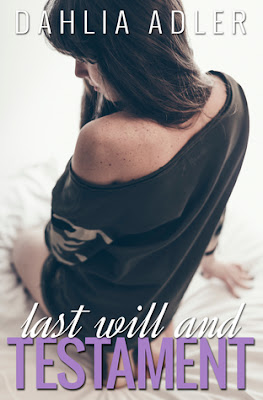 Lizzie Brandt was valedictorian of her high school class, but at Radleigh University, all she's acing are partying and hooking up with the wrong guys. But all that changes when her parents are killed in a tragic accident, making her guardian to her two younger brothers. To keep them out of foster care, she'll have to fix up her image, her life, and her GPA—fast. Too bad the only person on campus she can go to for help is her humorless, pedantic Byzantine History TA, Connor Lawson, who isn't exactly Lizzie's biggest fan.

But Connor surprises her. Not only is he a great tutor, but he’s also a pretty great babysitter. And chauffeur. And listener. And he understands exactly what it’s like to be on your own before you're ready. Before long, Lizzie realizes having a responsible-adult type around has its perks... and that she'd like to do some rather irresponsible (but considerably adult) things with him as well. Good thing he's not the kind of guy who'd ever reciprocate.

Until they turn into far more than teacher and student.

Until the relationship that helped put their lives back together threatens everything they both have left.

“Did you mean what you said?” he asks. “About dropping?”

“I’m not sure yet.” No point in lying, especially to the one person who’s actually been helping me organize my thoughts. It’s not like I know I can get into another class this late, but I do know the idea of sitting in one with him is torture. And the truth is, it’s not just his class I’ve been thinking about leaving. The more of Tyler’s moodiness I observe, the more I wonder if Radleigh itself just isn’t the right place for us right now.

“You can’t make me the difference between staying and going,” he says tightly, bracing a hand on the back of kitchen chair. He doesn’t meet my eyes, but instead watches his own knuckles go white from his grip. “That’s not fair.”

I snort. “First of all, you’re talking to someone who lost her parents in an instant and became an eighteen-year-old mother of two, so if you want to compete about ‘fair,’ you’ve brought a fucking watergun to the Second Crusade.”

“Second of all, this isn’t a ‘boo hoo, the boy I like doesn’t like me back so I’m uprooting my life’ situation, okay? I need an A in all my classes this semester in order to keep my scholarship, which I need to stay here. Now my transcript is shot to hell. Honestly, it’d probably be better for both me and the boys if I stopped wasting money on my tuition altogether and got a full-time job instead. Maybe then I could actually afford to get the boys’ their own damn bedrooms.”

“But you’re getting an A in the class….”

“Maybe for now, but you think that’s gonna hold up without you tutoring me?” I all but growl, taking care to make sure the boys can’t hear me through the door. “You think I’m gonna be able to focus in class every day? Watching you hand out papers and remembering how those hands feel on my skin? I’m supposed to listen to you lecture and not think about how you said my name like I was a glass of water and you were dying of thirst?”

“Lizzie, stop.” His knuckles are so white now I swear I can see bone through the skin. But I don’t care. I’m not done.

“I can’t be around you. I’m sorry if that sounds crazy to you or whatever. But I need to focus, and I don’t see myself doing that when all I can think about when I see you is finishing what we started.”

“I threw myself at you earlier today, Connor. Just because your feelings go away with the snap of your fingers doesn’t mean mine do.” The humiliation of my admission burns in my face, and I gather up the remaining dishes with a clatter and stalk past him to drop them in the sink. When I turn back around, he’s standing in my face, so close I can feel body heat radiating from every inch of him.

“You don’t really think that’s what happened, do you?”

“I don’t know how else to explain it,” I counter, but all the fight’s gone out of my voice. He’s just too close. The heady scent of his aftershave is scrambling my brain cells.

“I told you—because I’m your TA. And everything you just said is exactly why they forbid us from getting involved.”

“Because I can’t not be.” He takes the last step needed to close the space between us and slides his hands into my hair, pulling me into a starving, searching kiss. His tongue sweeps my mouth as if he doesn’t want to miss a spot, and pressed up against him as I am now, there’s no doubt he wants me every bit as much as he did last night, if not more. Even when he pulls away, panting.

Oooooh. Thoughts?! I love Dahlia's writing, and I can't wait to share my review with you within the next week or so.