Happy Birthday To Me by Brian Rowe 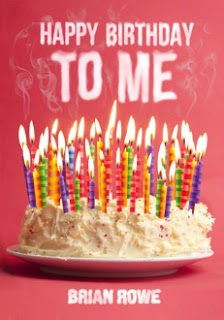 Synopsis: (from Goodreads)
Seventeen-year-old Cameron Martin has a huge problem: he’s aging a whole year of his life with each passing day!

High school is hard enough; imagine rapidly aging from seventeen to seventy in a matter of weeks, with no logical explanation, and with prom, graduation, and the state championship basketball game all on the horizon. That’s what happens to Cameron, a popular pretty boy who's never had to face a day looking anything but perfect.

All Cameron wants to do is go back to normal, but no one, not even the best doctors, can diagnose his condition. When he finds love with a mysterious young woman, however, he realizes his only hope for survival might be with the one person who started his condition in the first place...

My Thoughts:
The concept of this book is fabulous. Guy starts aging one year every single day. It’s insane, right? And it’s a lot of fun to think about the possibilities for the plot. It’s part sci-fi and a little bit Beauty and the Beast. I was intrigued by the whole idea for the book, but unfortunately it failed to keep my interest.

I had a few main problems that caused me to dislike the book, including:

I could say more, but I don’t really think I have to in order for my opinion on the book to be clear. I just didn’t much enjoy it. I couldn’t understand any of the characters’ motivations, and the prose failed to keep my attention. ‘Happy Birthday to Me’ has a really interesting plotline, but, for me, Brian Rowe’s execution of it leaves a lot to be desired.

The Cover:
I think it's really cute, but now that I've read the book I don't really think the pink fits with Cam's narrative voice at all. Still, the visual of all the many candles is pretty cool and funny.

Find Happy Birthday To Me by Brian Rowe on Goodreads, B&N, & Amazon.