Trisha Wolfe's debut novel, Destiny's Fire, was released earlier this week! In celebration of that fact there's a great blog tour going on to promote the book. Here's a little bit more about it: 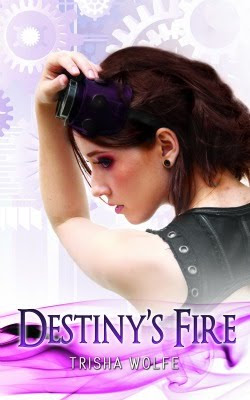 It’s the year 2040, and sixteen-year-old Dez Harkly is one of the last of her kind—part of a nearly extinct race of shape-shifters descended from guardians to the Egyptian pharaohs. Her home and her secret are threatened when the Council lowers the barrier, allowing the enemy race to enter the Shythe haven.

As the Narcolym airships approach, Dez and her friends rebel against their Council and secretly train for battle. Not only is Dez wary of war and her growing affection for her best friend Jace, but she fears the change her birthday will bring. When Dez’s newfound power rockets out of control, it’s a Narcolym who could change her fate… if she can trust him.

Dez’s guarded world crumbles when she discovers why the Narcos have really come to Haven Falls, and she's forced to choose between the race who raised her and the enemy she's feared her whole life. 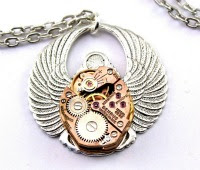 Be sure to check out the other tour posts for reviews, guest posts, interviews, and giveaways. The grand prize consists of an Egyptian/steampunk necklace (see picture), a print copy of Destiny's Fire, a DF bookmark, and a signed bookplate.

Posted by Ashley @ Book Labyrinth at 1:00 AM