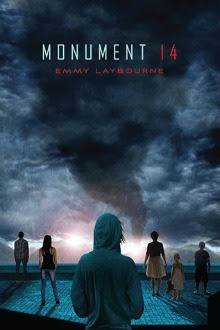 Synopsis: (from Goodreads)
Your mother hollers that you’re going to miss the bus. She can see it coming down the street. You don’t stop and hug her and tell her you love her. You don’t thank her for being a good, kind, patient mother. Of course not—you hurdle down the stairs and make a run for the corner.

Only, if it’s the last time you’ll ever see your mother, you sort of start to wish you’d stopped and did those things. Maybe even missed the bus.

But the bus was barreling down our street, so I ran.

Fourteen kids. One superstore. A million things that go wrong.

In Emmy Laybourne’s action-packed debut novel, six high school kids (some popular, some not), two eighth graders (one a tech genius), and six little kids trapped together in a chain superstore build a refuge for themselves inside. While outside, a series of escalating disasters, beginning with a monster hailstorm and ending with a chemical weapons spill, seems to be tearing the world—as they know it—apart.

My Thoughts:
This book has such a great premise, but unfortunately it failed to live up to my expectations. The idea of kids stuck in a Walmart type store after a huge apocolypse level of a disaster sounds so cool, but mostly I was just bored with this. The narrator, Dean, just wasn’t that interesting or easy to empathize with. I mean, when you’re writing a journal at the potential end of the world are you really going to spend that much time detailing what you’re cooking every day?? It was just... quite boring at times. Most of the other characters didn’t seem to go beyond their clique label stock characteristics either.

The most interesting part of the book was when the effects of the disaster were described, with chemicals from NORAD affecting everyone based on their blood type. However I think because the world of this book is so insular it failed to live up to the incredibly interesting premise. The disaster was relegated to outside the store, and therefore almost outside of the book itself. I just wasn’t impressed with the characters or the actions, which made it really hard for me to finish this one. I also disliked how there was no real resolution to the story, basically leaving an opening for a second book with the brother narrating his journey. With so many apocalyptic books on the market lately, I would definitely pass on this one.

The Cover:
Interesting, but not stunning.