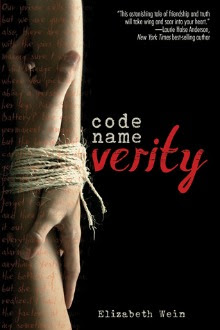 Synopsis: (from Goodreads)
Oct. 11th, 1943—A British spy plane crashes in Nazi-occupied France. Its pilot and passenger are best friends. One of the girls has a chance at survival. The other has lost the game before it's barely begun.

When “Verity” is arrested by the Gestapo, she's sure she doesn’t stand a chance. As a secret agent captured in enemy territory, she’s living a spy’s worst nightmare. Her Nazi interrogators give her a simple choice: reveal her mission or face a grisly execution.

As she intricately weaves her confession, Verity uncovers her past, how she became friends with the pilot Maddie, and why she left Maddie in the wrecked fuselage of their plane. On each new scrap of paper, Verity battles for her life, confronting her views on courage and failure and her desperate hope to make it home. But will trading her secrets be enough to save her from the enemy?

Harrowing and beautifully written, Elizabeth Wein creates a visceral read of danger, resolve, and survival that shows just how far true friends will go to save each other. Code Name Verity is an outstanding novel that will stick with you long after the last page.

My Thoughts:
‘Code Name Verity’ is a very emotional book that really hits you hard. It’s a story of war and tragedy, but it’s also a celebration of female power and female friendship. I really connected with both the female characters, and I loved the how the story was was told in an epistolary fashion.

I don’t often like unreliable narrators, but this was one case where it was done so cleverly and interestingly that I really did like it. I had suspicions and curiosities, and that kept me engaged even when the story was a bit slow.

This book was very bittersweet at times and also surprisingly funny (not what you’d expect to read in a book where torture occurs). The characters were so lovely and real feeling that I couldn’t help falling a bit in love with them.

Despite all my praise I have to say I didn’t love this one quite as much as everyone else seems to. It really is slow at times, and not everyone will appreciate all the details about aircraft. However I definitely think ‘Code Name Verity’ is worth a read because it’s a very powerful and important story that will stay with you.

The Cover:
It's okay, but can we talk about how amazing the UK one is?!