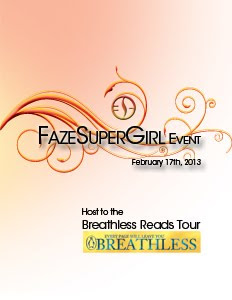 When I heard that the #BreathlessReads tour was coming to Toronto I knew I had to go. The event was originally supposed to feature Andrea Cremer, Morgan Rhodes, Jessica Spotswood, & Beth Revis -- however Andrea Cremer had to drop out at the last minute, and the lovely Adrienne Kress kindly stepped in to fill her spot. When I first signed up for the event hosted by Faze Magazine I knew it was a "Faze SuperGirl Event", but I thought that meant it was a big celebration featuring the authors. As the event got closer it was announced that there were three musical artists performing, and that the event was being co-hosted by a Much Music VJ. At this point I wasn't sure what to expect -- I wondered if there would be separate rooms where 1 room would feature the author panel and signings.... and, well, this definitely wasn't the case.

The afternoon didn't start off great. The event was supposed to start at 2, so many people assumed that the doors would open early. Because Avery and I came from out of town we were quite early, in case there had been bad weather or traffic. So we didn't really have much of a choice but to line up early, assuming (perhaps wrongly, but still) that the doors would open beforehand to leave time to get all the people's names checked off, etc. Keep in mind that with the windchill this was -26° weather (-14.8° Fahrenheit) and the line up was outside. No one was being let in, and it was just brutal waiting outside, especially because 2 o'clock came and went and we still weren't being let inside. Finally at about 2:15 they started letting people in in groups of 5 (!) and then 10. Thankfully we were toward the front of the line, but I heard from others that it took half an hour or so to get people inside. I understand there has to be some organization and working with the space you have, but it was just brutal that they kept people waiting outside in that cold.

Once we got inside it was pretty clear that things weren't very organized. There were different make up and nail stations, as well as pizza (which a lot of people never got any of, because it was set out quite randomly, and people seemed to be vultures, scooping up several pieces at a time as soon as it was set out) and drinks. All of this was quite haphazard, and never really explained to anyone. There was a table set up on the side of the room with books for sale, so at least we knew we were probably in the right place. The authors were not mentioned until a long way into the program. We only knew that the authors would eventually make an appearance because the very kind @RazorbillCA folks kept us up to date on Twitter. 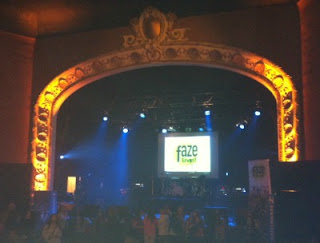 Here's what I think: for the regular patrons of Faze Magazine parties this was probably a great event. There were three musical performers throughout the afternoon (Brendn, Jesse Giddings, & Eleven Past One) and all of the younger girls seemed to really enjoy them. This was a case of feeling much to old for the event, which I totally get, as I'm not part of that targeted age group. I guess we might have noticed how their graphic labels it as a "SuperGirl Event" and only a "Host to the Breathless Reads Tour". The music and Faze Magazine was really the main focus of it all, and most of the audience didn't care about the authors at all. From a different perspective all of this is completely understandable, and yet I can't help but feel disappointed that the authors weren't utilized to their full potential.

There were a core group of us who came solely to see authors, and for more than an hour nothing had even been mentioned about them at all. The fact that Penguin was so awesome to feature Adrienne Kress and Morgan Rhodes and to bring Beth Revis and Jessica Spotswood all the way from the States -- and there wasn't even an official panel or Q&A from the audience? It felt like a wasted opportunity that us bloggers were standing around waiting for the authors while the the authors were sitting in the wings waiting for their turn. I'm all about promoting literacy in different types of venues, but this one just didn't seem to work. From what I could tell the crowd was way more focused on, and enthused about, the bands. It was just a very odd and different experience -- definitely not all bad, but not what most of us bloggers were expecting.


The Authors
But what about the good parts?? Well let me share those with you, lest you think I'm completely full of complaints. The best part is that Penguin Canada even set up this opportunity at all, so MANY thanks to them for bringing 4 amazing authors to Toronto. We don't tend to get these big tours up here, so it was a big treat to be able to see these authors at all.

When the authors finally did come down to sign it was a very awesome experience, because there was such a small group of us.

First up was Morgan Rhodes (aka Michelle Rowen), who was kind enough to spend her birthday at this event with us. Thank you, Morgan! 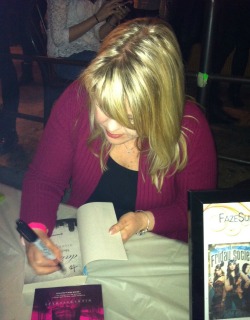 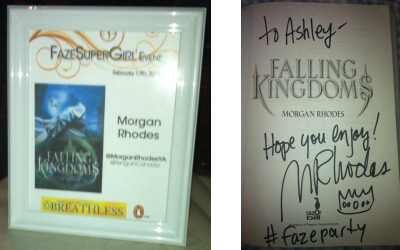 Next was Adrienne Kress, who is super super adorable. I had to include this pic even though it's a bit blurry from the horrible lighting. Can you tell from the dramatic pose that she's an actress as well? ;) 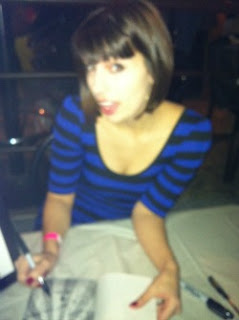 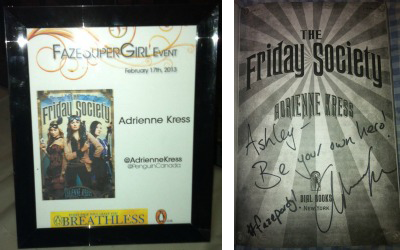 Third was Jessica Spotswood. She was soft spoken, but very sweet and happy to meet with everyone (also how small & perfect is her printing?!). 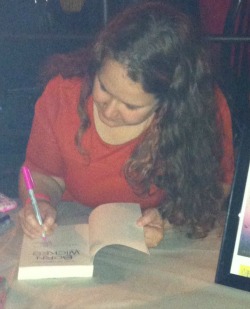 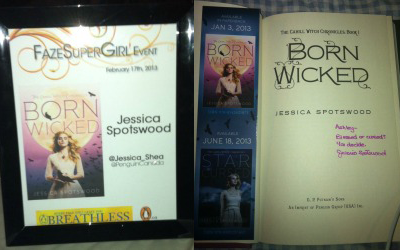 And last but not least was the very sweet Beth Revis, who complimented my Reading Railroad t-shirt (which I love, but I really need to stop wearing to bookish events, lest people think I don't own any other clothing). I talked to Beth for a few minutes about 'Shades of Earth', which I enjoyed the most out of her Across the Universe trilogy (love that each book got better!). Beth asked if I liked the last chapter, and revealed that her editor initially didn't want it to end like that. I can't say much more without being spoilery, but we had a nice chat about why the ending worked well. 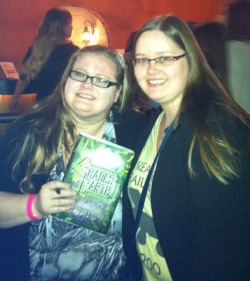 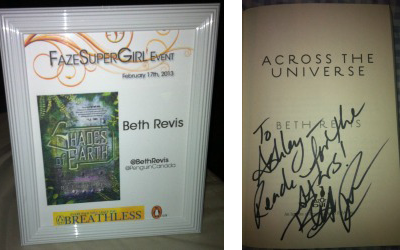 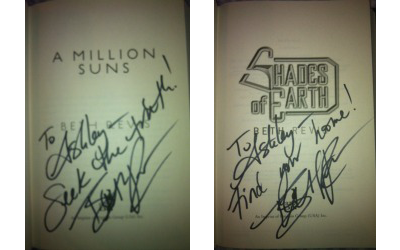 After the authors signed there was another bit in between, and for quite a while we thought that was it. Then they brought Adrienne & Morgan out on stage and asked them a few questions. 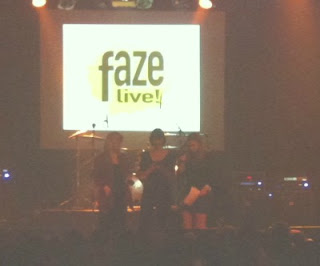 Adrienne's favourite book as a teenager was 'The Hitchhiker's Guide to the Galaxy', which changed everything for her. It influences her writing, and she believes it influenced her personality as well.

Morgan was asked where she most wanted to go in the world, and what reality TV show she would watch when there (random, I know). Morgan picked Australia and said that she loves reality TV like American Idol.

They were then asked about writing. Adrienne claimed that she is easily distracted by things like TV and twitter, but that the only way to succeed is to keep going -- she then adorably performed a scene from Finding Nemo ("Just keep swimming!"). Morgan's three keys to succeeding as an author are: believe in yourself, write what you want to write, and read a lot.

After these interviews the next musical act came on stage, and it was SO LOUD that we really didn't want to stand through a lot more just to hear a few questions -- so unfortunately we missed Beth and Jessica on stage, along with some author trivia toward the end. I'm looking forward to reading recaps from those few who stayed to the end of the event.

So was this event what I expected? Not really. But was meeting the authors still amazing? Absolutely!!

And was it fun to spend the afternoon laughing and joking with all my blogger pals who I don't get to see very often?? Yes!! In that way we made our own fun, even though much of the event wasn't what we expected it to be. 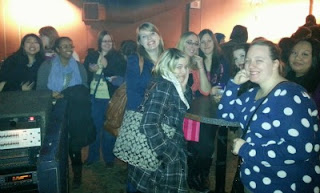 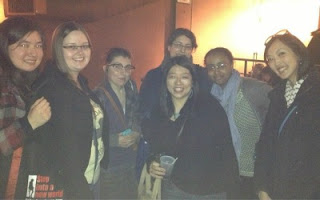 Pic courtesy of Liz.
L to R: Liz, me, Avery, Steph (in back), Tiff (in front), Ardo, & Michele.
Thank you SO much to Penguin Canada for bringing these great authors to Toronto, and much thanks to Morgan, Adrienne, Jessica, and Beth for taking part in this rather unique event.