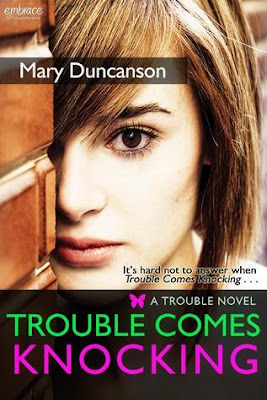 
Synopsis: (from Goodreads)
It’s hard not to answer when trouble comes knocking.

A girl who can’t forget…

Twenty-two-year-old Lucy Carver is like Sherlock Holmes in ballet flats, but her eidetic memory is more albatross than asset, and something she usually keeps hidden. When she notices that something’s amiss at her dead-end job, she jumps at the chance to finally use her ability for good. That is, until, a man is murdered, and she becomes the target of the killer.

A detective on his first case…

Detective Eli Reyes is overbearing, pompous, way too hot for Lucy’s own good, and seems as determined to ruin her relationship with her boyfriend, John, as finding the murderer. He brings Lucy in on the case, thinking she can help him get to the truth, only to cut her loose when he realizes he’s gotten far more than he ever bargained for.

A past that won’t go away…

When memories from her childhood invade her present, Lucy discovers a mystery bigger than she could have imagined. With the killer still after her, and Eli nowhere to be found, she takes things into her own hands, determined to expose the truth no matter what—before trouble comes knocking…again.

My Thoughts:
One thing I can definitely say about Trouble Comes Knocking is that it felt different from any other New Adult novel I’ve read, which can only be a good thing in a market oversaturated with near identical plots. This book had a mystery element, and it was centred on Lucy as a character. It actually felt like a hybrid New Adult/Adult story, though that isn’t necessarily a bad thing.

Lucy was a character I think most people can identify with, in that she feels lost and she isn’t entirely happy with how her life has turned out so far. What makes Lucy unique is a past that she doesn’t understand, and the fact that she has an eidetic memory: something that sounds awesome, but has given her more trouble than it's worth.

I was intrigued by the mystery aspect of this novel, and I didn’t figure out the whole plot until it was revealed, which is a nice change. There was definitely some intense action going on, making it exciting to read. On the romance side of things there was a sort-of love triangle, but I didn't mind it too much. One guy Lucy likes from the beginning. John seems sweet and he’s everything that she usually likes, but he’s also a bit suspicious (at least from the reader’s perspective). And then there’s Eli, who’s a bit off limits, as he's the detective supervising Lucy’s involvement on a case. However, the scenes between him and Lucy are full of chemistry and longing. I'm definitely Team Eli.

One element that I found a teensy bit lacking was the look into Lucy's past. It seemed strange that she hadn’t tried to figure out her past before now, and that once she found out some information she wasn’t more concerned about it. However I did like how high stakes that element of the book was, and I understand that this aspect of the story will be continued in the next book (unlike the main mystery, which was solved within this volume).

Overall this is a book that I genuinely enjoyed, both for the plot and the characters. I would gladly read on in this series once the next book is released.

The Cover:
Not a favourite, but I like that it's different.

About Mary:
Mary Duncanson, who also writes as Mary Malcolm, lives in North Texas with a menagerie of animals and feral roommates. She is currently looking to adopt a husband, preferably housebroken, preferably as silly as her. When she’s not corraling her household, she’s talking to the characters in her head and hoping they talk back. When she’s not doing all that, she can be found wandering around Central Market with a happy, drooly foodie look on her face. Do not judge her, it is her Mecca.

Mary’s been writing since she was a teenager though spent quite a few years studying toward becoming a doctor before she realized she wanted to be a full-time author. Unfortunately, the people who own her student loans still want to be paid for the years they supported her medical dreams. Mary lives on a steady diet of coffee and chocolate and believes, like Eleanor Roosevelt, that people should believe in the beauty of their dreams. She also believes people should ignore the word should because really, it’s kind of a judgmental word. Mary dreams of one day living as a full-time, well paid novelist (hint, hint) and also of one day traveling to Chile to pay homage to her soul mate, Pablo Neruda.

About Embrace:
EMBRACE…endless possibilities. A new adult imprint from Entangled, launching November 11th! You can follow them and get more information about future titles at @EPEmbrace or their Facebook.