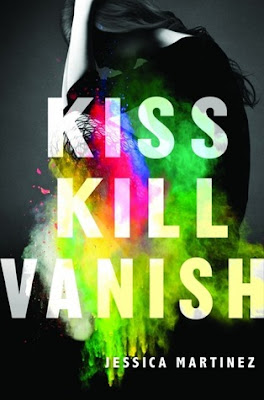 One moment, she was wrapped in Emilio’s arms, melting into his kiss. The next, she was witnessing the unthinkable: a murder in cold blood, ordered by her father and carried out by her boyfriend. When Emilio pulled the trigger, Valentina disappeared. She made a split-second decision to shed her identity and flee her life of privilege, leaving the glittering parties and sultry nightlife of Miami far behind.

She doesn’t know how to explain to herself what she saw. All she knows now is that nothing she believed about her family, her heart, or Emilio’s love, was real.

She can change her name and deny her past, but Valentina can’t run from the truth. The lines between right and wrong, and trust and betrayal, will be blurred beyond recognition as she untangles the deceptions of the two men she once loved and races to find her own truth.

My Thoughts:
What is there to say about Kiss Kill Vanish? This book is amazing! It’s exciting, romantic, and thrilling; it kept me at the edge of my seat.

It's hard to talk specifics without giving away details because this is a very twisty book, one where you're never sure who to trust. Valentina, or Jane as she’s going by in Montreal, is hiding from her boyfriend and her father. There’s this whole dichotomy between V’s quiet life in Montreal, practicing her mandolin, and the life she’s left behind in Miami -- a life that she’s reminded of through her involvement with two rich boys.

There’s definitely a slow reveal structure to the book, where for a lot of the time you’re guessing about what exactly happened back in Miami. As you figure out some of what's going on it's very intense and emotional. There’s also a very romantic feel to the book, both with how Valentina got involved in this situation, and in another aspect which I can’t even really allude to. Let’s just say that there’s one character who is so different from who he starts as and I really loved him, even in his first couple of scenes.

I really believe that Kiss Kill Vanish is the strongest of Jessica Martinez’s books so far. It’s been months since I read this novel, but I still remember how it felt to read it. It’s an amazing, thrilling book that I would recommend to everyone.