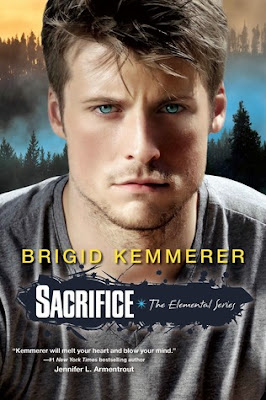 One misstep and they lose it all. For the last time.

Michael Merrick understands pressure. He's the only parent his three brothers have had for years. His power to control Earth could kill someone if he miscalculates. Now an Elemental Guide has it in for his family, and he's all that stands in the way.

His girlfriend, Hannah, understands pressure too. She's got a child of her own, and a job as a firefighter that could put her life in danger at any moment.

But there are people who have had enough of Michael's defiance, his family's 'bad luck'. Before he knows it, Michael's enemies have turned into the Merricks' enemies, and they're armed for war.

They're not interested in surrender. But Michael isn't the white flag type anyway. Everything is set for the final showdown.

Four elements, one family. Will they hold together, or be torn apart?

My Thoughts:
Sacrifice, by itself, is a good novel. I mean, seriously, I truly enjoyed it. Michael is a character who we haven’t really gotten to know very well, so I loved seeing from his perspective and experiencing how much he loves his brothers.

The thing is, though, Sacrifice is also the final chapter of the Elementals series. For a series conclusion it did a lot, but it also left a lot up in the air. I’m not the kind of person who needs everything wrapped up in a tidy bow (that’s boring and unrealistic), but I honestly would have liked it to be a bit more of a firm conclusion. I would have liked to see a real transfer of power in the Guides to people who aren’t, you know, nutso murderers. I really do think there’s enough material for another book. That being said, I wasn’t truly unhappy with where things left off -- just a smidge unsatisfied.

If you look to the book title, it really doesn’t bring about happy thoughts, and yes, there is definitely a real sacrifice in Sacrifice. Of course I can’t talk about it without being spoilery, but I’ll try to talk around it while being as non-spoilery as I can. I think what happened was an interesting choice, but it kind of seemed like the easy choice, too. On the one hand you could almost see it leading there, and while it was sad, it wasn’t as devastating as it could have been. On the other hand, it was super devastating. When you see a person so worn down, it seems almost too cruel to make them the target.

So, yeah. This book definitely features a lot of emotional upheaval. Again, can’t talk about it without spoiling things. But Michael is going through a LOT. I mean, he is basically under constant siege and suspicion from the law because of the events around him. Michael has to face a lot and do so by himself. His journey throughout the book is to learn how grown up his brothers have become, and that maybe he can trust some people and let them in.

While certain aspects of this book bothered me, I still think it was a decent conclusion to the series. If you’re at all a fan of the series I suggest you check this one out, and if you haven’t started the series I definitely recommend it. Layered characters and a supernatural war = a lot of fun to read about.

The Cover:
Kind of meh, but actually probably the best cover of the series.