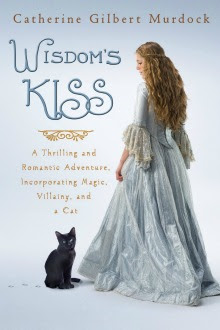 Synopsis: (from Goodreads)
Princess Wisdom, known as Dizzy, longs for a life of adventure far beyond the staid old kingdom of Montagne.

Tips, a soldier, longs to keep his true life secret from his family.

Fortitude, an orphaned maid, longs only for Tips.

These three passionate souls might just attain their dreams while preserving Montagne from certain destruction, if only they can tolerate each other long enough to come up with a plan. Tough to save the world when you can't even be in the same room together.

Magic, cunning, and one very special cat join forces in this hilarious, extraordinary tale by the author of Dairy Queen and Princess Ben. An incredibly creative tale told with diaries, memoirs, encyclopedia entries, letters, biographies, even a stage play, all woven together into a grand adventure.

My Thoughts:
This book had a lot of great potential, but it ended up falling flat in a lot of ways. It took me a while to get into it because of all the different characters and perspectives, but eventually the action picked up a bit and I was intrigued. Then something specific happened with two of the characters (which I can’t reveal without being spoiler-y) and I seriously began to resent this book. I kept hoping it might get better, but it really didn’t.

My first major complaint is all the different perspectives. There were just too many characters to keep track of, and the switch to a different format (e.g. letter, memoir, encyclopedia) often cramped the narration style. The two perspectives I really enjoyed were Nonna Ben’s letters and Trudy’s memoir, and it seemed like whenever I was getting really interested in what they had to say I was whisked into another perspective.

I have a hard time finding much of anything positive to say about the book. I didn’t find the characters very interesting: again, I liked Trudy and Nonna Ben, but I pretty much despised Dizzy and Tips, the other main characters, because they were so selfish. There was also the presence of insta-love to the extreme, which was incredibly ridiculous.

The thing is, I think the story had a lot of promise. A more humorous fairy tale type of story sounds utterly appealing, and even the different types of perspectives can be awesome if done well. Instead we’re left reading a choppy story with underdeveloped (and often unlikable) characters. I have to admit that I only finished this book because I got it for review. If it were from the library I probably would have quit half way through, or maybe even sooner.

The Cover:
Meh. I do love how it features the subtitle, though really the cat didn't have a very large part in the book at all, unfortunately.