The Faerie Ring by Kiki Hamilton 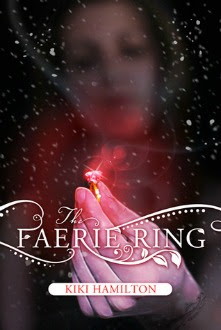 Synopsis: (from Goodreads)
Debut novelist Kiki Hamilton takes readers from the gritty slums and glittering ballrooms of Victorian London to the beguiling but menacing Otherworld of the Fey in this spellbinding tale of romance, suspense, and danger.

The year is 1871, and Tiki has been making a home for herself and her family of orphans in a deserted hideaway adjoining Charing Cross Station in central London. Their only means of survival is by picking pockets. One December night, Tiki steals a ring, and sets off a chain of events that could lead to all-out war with the Fey. For the ring belongs to Queen Victoria, and it binds the rulers of England and the realm of Faerie to peace. With the ring missing, a rebel group of faeries hopes to break the treaty with dark magic and blood—Tiki’s blood.

Unbeknownst to Tiki, she is being watched—and protected—by Rieker, a fellow thief who suspects she is involved in the disappearance of the ring. Rieker has secrets of his own, and Tiki is not all that she appears to be. Her very existence haunts Prince Leopold, the Queen’s son, who is driven to know more about the mysterious mark that encircles her wrist.

Prince, pauper, and thief—all must work together to secure the treaty…

My Thoughts:
So first of all, the setting for this one is fabulous! I’m a total Anglophile and I adore London, so that made me happy, and I was also a history major, so I do enjoy me some historicals from time to time. Add in some amazing characters and faerie lore and I’m sold!

Tiki is a lovely main character. She shows such loyalty to her street family, and I also really enjoyed reading about her emerging feelings for Rieker. You really grew to care about the characters. I mean, how can you not care about these teens and kids who are trying desperately to take care of each other and survive? Especially when they care so much about little Clara who is sick.

The whole book is a big run around figuring out that the ring Tiki has stolen actually keeps a truce between humans and faeries. So how can Tiki return the ring without getting caught, and how can they get a reward for the ring (desperately needing the money to survive) while still putting it back in royal hands to keep everyone safe? So much for these characters to figure out, and let me tell you that it's so much fun to read about.

I liked the faerie aspect of this book because it was there and it was interesting without being overwhelming. I’m actually not a huge fan of faerie books, but this one was great. I know we’ll get into more of the faerie aspect in future books, but I can tell it’s going to be done in a fresh and interesting way that doesn’t overwhelm us mere mortals who haven’t read every faerie book out there.

Kiki Hamilton’s writing flows and keeps you wanting to read more. ‘The Faerie Ring’ has characters you will totally fall for (ranging from street beggars to the monarchies), an awesome setting, and features secret family histories and secret identities. One thing I especially appreciated was how you couldn’t tell if the book was a standalone or a series. This book could stand by itself and you would be totally satisfied, but the fact that it’s a series leaves you to wonder about the little threads of information that were left untouched and the little hints of where character relationships will go. Overall, I really liked this one, and I will definitely be reading on in the series.

The Cover:
I like it, especially the font and treatment for the title (gorgeous!).