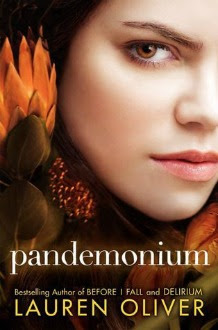 Lauren Oliver delivers an electrifying follow-up to her acclaimed New York Times bestseller, Delirium. This riveting, brilliant novel crackles with the fire of fierce defiance, forbidden romance, and the sparks of a revolution about to ignite.

My Thoughts:
So if you look at my initial reaction on Goodreads, it was this: "Holy moly, so freaking good!" And yah, I could basically sum up my review with that statement. I was blown away with how amazing this sequel to 'Delirum' was. It's filled with heart pounding emotion, and I absolutely flew through the pages in order to discover what would happen next.

This is a good 2nd book in a series. It's clear that this is a bridge story for the trilogy, but there's still a lot going on. You get to explore what happens to Lena in the wild and what's happening with uprisings of resistance against the Cure. There are new characters introduced who you quickly care for, while still aching along with Lena at the loss of Alex, Hanna, and Grace.

Despite my adoration for this book I'm not entirely sure the way it was told was necessary. We get to experience "Now" (Lena's present) and "Then" (Lena when she first came into the wild), going back and forth between the two during the book. The thing is, the way it was put together was quite wonderful, with parallels going on between the two times, but it was also really frustrating. I think it probably could have been told in a linear fashion and nothing would have been lacking. Still, that's really my only complaint about the book.

'Pandemonium' ended exactly how I expected it to right from the beginning, but getting to that point had my stomach in knots. The ending will leave you freaking out and dying for the third book, just like 'Delirium' did for the second book. Lauren Oliver is an incredible storyteller with a gift for crafting words and characters that you can't help but fall in love with.

The Cover:
Well... visually the colours are pretty, though I don't really get it. Like random flowers in fall colours mean the Wild? I dunno. But mostly I just wish it matched my Delirium HC. :'(

You can also read the first chapter and view Canadian buy links on Harper Collins Canada.