The Traitor in the Tunnel by Y.S. Lee 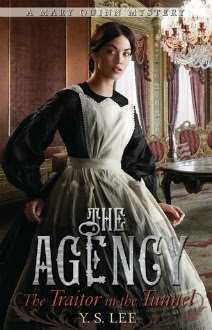 Synopsis: (from Goodreads)
Get steeped in suspense, romance, and high Victorian intrigue as Mary goes undercover at Buckingham Palace - and learns a startling secret at the Tower of London.

Queen Victoria has a little problem: there's a petty thief at work in Buckingham Palace. Charged with discretion, the Agency puts quickwitted Mary Quinn on the case, where she must pose as a domestic while fending off the attentions of a feckless Prince of Wales. But when the prince witnesses the murder of one of his friends in an opium den, the potential for scandal looms large. And Mary faces an even more unsettling possibility: the accused killer, a Chinese sailor imprisoned in the Tower of London, shares a name with her long-lost father. Meanwhile, engineer James Easton, Mary's onetime paramour, is at work shoring up the sewers beneath the palace, where an unexpected tunnel seems to be very much in use. Can Mary and James trust each other (and put their simmering feelings aside) long enough to solve the mystery and protect the Royal Family? Hoist on your waders for Mary's most personal case yet, where the stakes couldn't be higher - and she has everything to lose.

My Thoughts:
I almost feel like this book is such a fun and interesting read that it should speak for itself. However, I’ll attempt to explain why I like this series so much. This volume of The Agency series features several interconnected mysteries that centre around Buckingham Palace, royal intrigue, and the Queen. As if that doesn’t sound awesome enough, Y.S. Lee also knows how to write fabulous characters.

Mary is one of the best historical characters I can think of. Granted, I don’t read a ton of historical books, but of the ones I’ve read Mary definitely sticks out the most. Heck, she even stands out amongst heroines from all genres. Mary is so strong, intelligent, and self-aware, but she’s also funny and feminine. She doesn’t let her strength get in the way of who she is as a person or as a woman. And can we please talk about her chemistry with James? They have a connection that just leaps of the page, and their banter is beyond adorable. James is such a lovely character as well, accepting and respecting Mary’s strengths, and appreciating her because of (not in spite of) who she is.

Basically this is an amazing series that always includes an interesting mystery (one that’s intriguing but doesn’t get bogged down in having to keep track of every little detail), great characters, and an amazing setting (being a PhD in the Victorian time period, Y.S. Lee knows how to include just the right amount of real-life details). I think these books just keep getting better, and after the way this book ended I was extremely excited to find out that there would be more books to come in the series.

Find The Traitor in the Tunnel by Y.S. Lee on Goodreads, Book Depository, & Amazon.