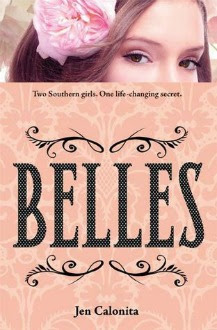 Synopsis: (from Goodreads)
Fifteen-year-old Isabelle Scott loves her life by the boardwalk on the supposed wrong side of the tracks in North Carolina. But when tragedy strikes, a social worker sends her to live with a long-lost uncle and his preppy privileged family. Isabelle is taken away from everything she's ever known, and, unfortunately, inserting her into the glamorous lifestyle of Emerald Cove doesn't go so well. Her cousin Mirabelle Monroe isn't thrilled to share her life with an outsider, and, in addition to dealing with all the rumors and backstabbing that lurk beneath their classmates' Southern charm, a secret is unfolding that will change both girls' lives forever.

My Thoughts:
‘Belles’ reminded me a lot of ‘She’s So Dead to Us’ by Kieran Scott, in that they both feature rich prep school kids looking down on the poor girl. That’s such a base description, but they really did have a similar feel to them in a lot of ways. ‘Belles’ features a lot of interesting characters, minus the Queen Bee mean girl who is just plain nasty for the sake of being so. For once I’d love to see a mean girl with some depth, which you do get a bit of thankfully, as this book is told from the perspectives of Isabelle (said “poor girl”) as well as Mirabelle, Izzie’s rich cousin. I liked seeing what both girls were thinking versus how they were perceived by those around them.

An interesting angle to the story was Mira’s dad’s political campaign. With the crisis manager and the family photo ops it totally reminded me of The Good Wife. I also loved how Izzie’s aunt was so nice and protective of her. It was the opposite of what you would expect from a character like that, so I appreciated that.

‘Belles’ was fun and interesting enough to keep my interest, and I’d probably gladly read the second book. I liked the characters well enough, and I think it will be interesting to see how they grow and change in the next book. Overall a pretty fluffy read, but in this case I mean that in a good way.

The Cover:
I love the design aspect, but I don't really like the top photo.