I am very excited to host the funny & fabulous Meredith Zeitlin here on Book Labyrinth today.

I loved Merdeith's book 'Freshman Year & Other Unnatural Disasters' (read my review here), so I was thrilled when she agreed to write a guest post for me.

Meredith Zeitlin on Writing & Teenage Voice
When I sat down to write what eventually became Freshman Year..., I really didn't have a plan in mind. I just started writing what Kelsey was thinking about, and who she was kind of unfolded as I went along. But she was always fourteen, right from the beginning. I didn't think about making her voice young or mature for her age, though – I just wrote it. To be honest, her voice is just my voice - with a little extra outrage thrown in for dramatic effect. (Or maybe not. I bet my friends would tell you I'm actually exactly like that. Oh, dear.)

I guess that either makes me extremely immature... or serves to remind readers something that I've always thought to be true: we have the same voice in our heads, the same basic core of self, for our whole lives. When authors “write younger,” I think a lot of times the characters end up being dumbed down. I don't think this is purposeful, of course – it's just so tempting to think that, as adults, we're so much more put together than teens or kids. The truth (at least, in my opinion) is that adults just have more experiences to draw from when we make decisions. But the basic who-we-are-ness? That's the same. It always has been for me, anyway.

There have been a few reviewers who've said that Kelsey is overly self-involved, or whiny and totally obsessed with silly problems, or that she can be petty and selfish - and they're quick to point out that that's typical of girls her age. And you know what? It's totally true. She isn't perfect – far from it. She can be all of those things. But so can I, and I'm far from fourteen. So can most people. I wasn't interested in writing a character who starts out (or even ends up!) a paragon of society. I wanted to write a character who felt like a real person, complete with faults and personality flaws. To show that it's possible to be likeable and funny and kind AND a complete pain in the neck at the same time. Getting through life despite our flaws is what makes us better, stronger people, and that's what I wanted to explore with Kelsey and her friends (none of whom are perfect either). And I was totally obsessed with every little thing when I was fourteen - things that ranged from “trivial” boy stuff to issues I considered to be very adult, like serious problems a friend was having or getting into a good college. Everything was drama. And you know what? Most of the time, it still is. There're just a wider variety of things to obsess over now. As adults, we learn to prioritize our selfishness – or maybe just hide it better. But ultimately, we're all just people: sometimes awesome, sometimes petty, always growing.

So: I never thought about writing Kelsey “as a fourteen year old,” whatever that means. I just thought about writing HER, and having her comment on the world around her. And just like when I was fourteen, there was lots going on; I figured throwing her onto the high seas of the first day of high school was a perfect beginning point for a girl who is overwhelmed with life in general. (And yes – my own high school experiences definitely inspired most of Kelsey's adventures.)

Really, getting into Kelsey's head was just about putting myself back in her shoes... which, as it turns out, aren't that much smaller than my own shoes. They're just required to walk into to the warzone that is high school every day. ;) 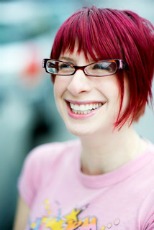 Thanks Meredith!! Love this post!; I think it's so true about having the same general voice our whole lives.

You can read more about Kelsey & Meredith at http://www.kelseyfinkelstein.com/, find Meredeith on Twitter (@zeitlingeist), & find Freshman Year... on Facebook.