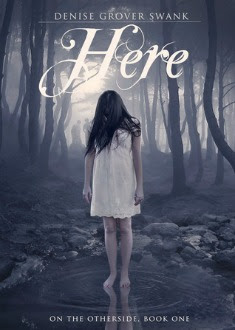 Synopsis: (from Goodreads)
Sixteen year old Julia Phillips buries herself in guilt after killing her best friend Monica in a car accident. Julia awoke in the hospital with a broken leg, a new talent for drawing and false memories of the accident, in which she dies and Monica lives. The doctors attribute this to her head injury, but no one can explain how a bracelet engraved with her name ended up at the scene of the accident. A bracelet no one has ever seen before.

Classmate Evan Whittaker paid Julia no attention before the accident, let alone after. Now suddenly he’s volunteering to tutor her and offering to drive her home. She can't ignore that his new obsession started after his two-day disappearance last week and that he wears a pendant she’s been drawing for months. When the police show up one night looking for Evan, he begs Julia to run with him, convincing her that Monica is still alive. Julia agrees to go, never guessing where he’s really from.

My Thoughts:
'Here' had a bit of a slow start, yet I always found it intriguing. You keep wondering exactly what's going on, even when you have a good hypothesis about it. In the second half of the book it became very Fringe-like, which I really enjoyed. Plus the slow build up leads to an action-packed second half, which was exciting to read about. 'Here' features another YA love triangle, which kind of drove me crazy, but at least made sense in the context of the book.

I feel like 'Here' fills a really great void in YA because it's more on the science fiction end of things rather than the paranormal. However the science fiction was very accessible, so if sci-fi isn't really your thing I think you'll still enjoy this one, as it doesn't get too technical or filled with details. Overall 'Here' was a good read that kept me interested and involved in the story, and I definitely liked it well enough to read the 2nd book once it's released.

Posted by Ashley @ Book Labyrinth at 5:00 AM