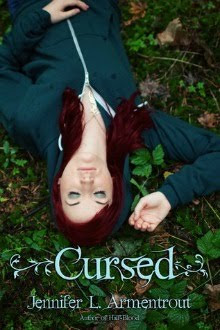 Ember operates on a no-touch policy with all living things--including boys. When Hayden Cromwell shows up, quoting Oscar Wilde and claiming her curse is a gift, she thinks he’s a crazed cutie. But when he tells her he can help control it, she’s more than interested. There’s just one catch: Ember has to trust Hayden's adopted father, a man she's sure has sinister reasons for collecting children whose abilities even weird her out. However, she’s willing to do anything to hold her sister's hand again. And hell, she'd also like to be able to kiss Hayden. Who wouldn't?

But when Ember learns the accident that turned her into a freak may not've been an accident at all, she’s not sure who to trust. Someone wanted her dead, and the closer she gets to the truth, the closer she is to losing not only her heart, but her life. For real this time.

My Thoughts:
The concept of ‘Cursed’ is an intriguing one, despite the fact that there have been a few “her touch is death” books released over the last couple of years (in all fairness this was written before most of them were released). I thought Jennifer Armentrout did a good job of developing Ember and portraying how this ability, or curse as she sees it, affects her. I’m a sucker for books featuring X-Men like powers, so I enjoyed being introduced to the characters who had different abilities. Where I think Armentrout really succeeded was in showing how the “super powers” for these characters weren’t all good or all bad.

While I think having Ember’s sister Olivia as the anchor keeping Ember with this group of people was a smart plotting decision, I was disappointed that Olivia’s presence quickly disappeared once Hayden entered the scene. For someone supposedly so worried about her sister, Ember spent a lot more time with Hayden and thinking about wanting to touch Hayden than she did with Olivia. I was also disappointed in how James was introduced and then shoved to the side so easily. I know Ember had a lot going on, but I would have thought she could’ve spent more time thinking on a certain situation (trying to remain spoiler-free for the most part, so sorry if that sounds really vague).

I liked how Cursed is a “standalone with series potential”, because it means that the main mystery of the novel is actually solved and you aren’t left hanging. Unfortunately it’s pretty clear throughout the book who the big bad is, but while the culprit was clear to me from the beginning, his/her motives were interesting to discover. This was a decent read overall, but I don’t feel that it’s Armentrout’s strongest. While this isn’t a very helpful criticism, 'Cursed' just feels like it’s missing the je ne sais quoi that make Jennifer's novels so compulsively readable.

The Cover:
Not my fave, but I think it stands out nicely.