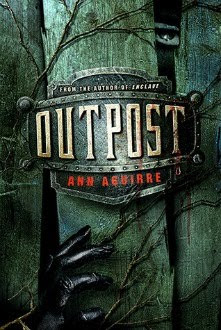 Synopsis: (from Goodreads)
Deuce’s whole world has changed. Down below, she was considered an adult. Now, topside in a town called Salvation, she’s a brat in need of training in the eyes of the townsfolk. She doesn’t fit in with the other girls: Deuce only knows how to fight.

To make matters worse, her Hunter partner, Fade, keeps Deuce at a distance. Her feelings for Fade haven’t changed, but he seems not to want her around anymore. Confused and lonely, she starts looking for a way out.

Deuce signs up to serve in the summer patrols—those who make sure the planters can work the fields without danger. It should be routine, but things have been changing on the surface, just as they did below ground. The Freaks have grown smarter. They’re watching. Waiting. Planning. The monsters don’t intend to let Salvation survive, and it may take a girl like Deuce to turn back the tide.

My Thoughts:
Despite some issues I had with ‘Enclave’, I really enjoyed that book overall. Needless to say, I was excited to read ‘Outpost’, and it didn’t disappoint. ‘Enclave’ ends in a whole new setting, and as ‘Outpost’ begins we see our characters adjusting to this new town. While the town is a haven, it’s also a place which was founded on strict religious principles, which doesn’t exactly jive with Deuce’s identity as a Huntress. Because of the new setting we also have new characters, new attachments, and new roles. Deuce finds herself with parent figures for the first time, and she begins to see different sides of herself. I really liked how she still identified very much as a Huntress, but also saw herself as simply a Girl. Deuce learned to acknowledge both sides of herself, something that wouldn’t have been possible in the Enclave, and I think she grows quite a bit as a character.

In ‘Outpost’ the town must also deal with the reality of the Freaks, who are still changing and gathering. This zombie element adds a whole different feel and urgency to this post-apocalyptic story. While the Freaks are a big part of this story, I also found the romance to be a huge aspect, and it was one that I adored. While there are complications, you get to see that Deuce and Fade’s relationship is based on real feelings of affection, trust, and respect. I loved how there was real growth to their relationship as they stuck by each other during difficult times.

While I, again, had some minor issues with internal world building in ‘Outpost’, it wasn’t enough to truly bug me. I feel like the action of the story and the characters made up for any small inconsistencies. There’s something really addictive about Ann Aguirre’s writing that makes me want to read even more from her. I can’t wait for the next book!

The Cover:
I like the title treatment, and the creepiness does match the tone pretty well.