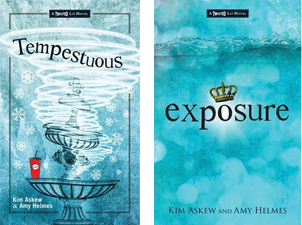 In honor of William Shakespeare’s birthday (celebrated on April 23), authors Kim Askew and Amy Helmes, have dropped by with a guest blog post to announce a special contest!


Get A “Twisted Lit” Character
Named After You!
We reimagined William Shakespeare’s “The Tempest” and “Macbeth,” with our “compulsively readable” YA books, Tempestuous and Exposure. Ever since the novels were published a few months ago through Merit Press we’ve encountered a frequent question: Which of Shakespeare’s plays will inspire your next books in the Twisted Lit series?

While we’re currently hard at work putting our own spin on the Bard’s “Romeo and Juliet” we thought we’d look to you, the readers, to help us pick the fourth Shakespeare play that will inspire our next book in the series. Got a hankering for a new spin on “Hamlet?” Love to see “King Lear” get a YA update? Would you make much ado over our take on “Much Ado About Nothing?”

Go to our Facebook page (Facebook.com/Twistedlitnovels) and write on our wall to weigh in on which Shakespeare play you’d like us to revamp next. In doing so, you’ll be entered to have your very own name mentioned in one of our upcoming books (either as a character or some other fun reference). If you’ve always wanted to see your name in print — in a YA novel, no less — now’s your chance! The winner will also receive autographed copies of our first two novels, Tempestuous and Exposure.

We’re looking forward to hearing your suggestions! (And don’t forget to follow us on twitter at @kaskew and @amyhelmes.)

* Winner will not be compensated for use of his or her name, and publication is not guaranteed. Details of plot and character used in connection with the name as it appears in the book are up to the sole discretion of the authors. Contest ends June 1.

Thanks so much for sharing this, ladies! I know I'm incredibly intrigued to read a modern day YA version of Romeo & Juliet, and to see which play you end up taking on next.