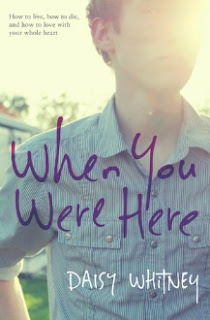 When You Were Here
by Daisy Whitney
Publisher: Little, Brown
Release Date: June 4, 2013

Synopsis (from Goodreads):
Filled with humor, raw emotion, a strong voice, and a brilliant dog named Sandy Koufax, When You Were Here explores the two most powerful forces known to man-death and love. Daisy Whitney brings her characters to life with a deft touch and resonating authenticity.

When he gets a letter from his mom's property manager in Tokyo, where she had been going for treatment, it shows a side of his mother he never knew. So, with no other sense of direction, Danny travels to Tokyo to connect with his mother's memory and make sense of her final months, which seemed filled with more joy than Danny ever knew. There, among the cherry blossoms, temples, and crowds, and with the help of an almost-but-definitely-not Harijuku girl, he begins to see how it may not have been ancient magic or mystical treatment that kept his mother going. Perhaps, the secret of how to live lies in how she died.

Normally I don't necessarily seek out books that sound so freaking sad. However, I am a big. fan of Daisy Whitney's, and I just know that this one will be emotional, but beautiful.