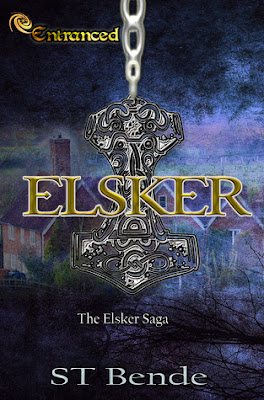 Kristia Tostenson prefers Earl Grey to Grey Goose and book clubs to nightclubs, but when she transfers from her one-stoplight town to Cardiff University in Wales she falls in love with Ull Myhr. Her new boyfriend isn’t exactly what she was expecting. He’s an honest-to-goodness Norse God — an immortal assassin fated to die at Ragnarok, the battle destined to destroy Asgard and Earth. Kristia’s crazy visions are the only thing that can save their realms.


'Elsker' is a New Adult Paranormal Romance that released on April 22, 2013 from Entranced Publishing, Blush.

Purchase Elsker:
Amazon / B&N / Kobo
Read an Excerpt:
On the Entranced website.
Becoming an Accidental Novelist
by ST Bende
My name is ST Bende and I love downhill skiing and baking cookies. I watch every single IndyCar race, and shamelessly root for drivers just because they’re fun (Helio Castroneves), cute (James Jakes), and/or nice (Ryan Hunter-Reay). My family originally hails from Scandinavia (like, generations ago), and I’ve spent the better part of a decade trying to learn Norwegian. To date, I can say “thanks for the waffles,” “how are you,” and “Grandma is taking the train to the city.” Clearly, I’m not the brightest bulb in the language marquee. Oh, and a while back, I accidentally wrote a book.

Sounds ridiculous to you too, right? Let me explain.

Once upon a time I was on a road trip when I got a hankering for caffeine. I pulled into a drive-through coffee hut on the side of the road. The road was US Highway 101, which doubled as ‘Main Street’ for the blink-and-you’ll-miss-it town of Nehalem, Oregon. With 250 residents and a solitary stoplight, it was the smallest town I’d ever seen. And with forest to my left, ocean to my right, and a river straight ahead, it was gorgeous. My brain started spinning. I snapped a picture of the coffee hut as I drove away, and I’m so glad I did. That was the moment ELSKER was born.

Like a lot of girls, I’ve always kept a journal. Sometimes I treat it like a diary and vent, and sometimes I make up stories and dream. When I got home from the road trip, I started writing a little story about a girl from Nehalem who fell in love with a Norse god. It was just for me, and I never intended to share it with anyone. Ever.

I expected to be done with the Nehalem story in a couple of days, but I couldn’t stop thinking about it -- I wanted to really delve into the girl’s world. Since I happened to have some time on my hands, I did what any self-respecting storyteller does: I Googled. I found out as much as I could about Nehalem, and fleshed out the girl’s back-story. And since I love Norse mythology, I figured this was as good an excuse as any to read some mythology books. So I went to my library and checked out the Scandinavian mythology books. All of them. Even the kid’s books. If I was going to give this Nehalem girl a Norse hero, I wanted him to be one of the lesser known ones. You don’t go recreating Thor without stepping on a few toes. (By the way, if you are a kid and you’re looking for some good mythology books, have your parents read you the Scandinavian ones out loud but do not look at the illustrations. I’m still having nightmares about trolls.)

After reading all the books, I zeroed in on my hero -- Ull, the Norse God of Winter. There were comparatively few scholarly writings on him, plus he was a big time skier just like me. Perfect. About this time I also happened onto an amazing blog written by a woman living in the Cotswolds, England. Her pictures were so pretty, I wanted to do more ‘research’. So my Nehalem girl and my Norse God got a transplant, and my little journal story took a turn.

Every day I’d go back and write a little bit more. Eventually my Nehalem girl got a name -- Kristia. Ull brought some friends to the journal party. Ragnarok entered the picture. And one day I looked at my journal and saw I’d reached a ridiculous page number. This fun little hobby had reached book-length proportions. By now I was so in love with Kristia, Ull, and their friends, that I wanted to introduce them to everyone I met. But my story was raw, very raw, and I’d only written it for myself. Most likely, nobody would want to read it. Plus, I had no idea how a story even got published. Guess I wasn’t the brightest bulb in the publishing marquee, either.

I Googled again, and stumbled onto an amazing critique partner -- Jacqueline Gardner. She’s an actual good writer, and a really nice person, and she helped me so, so much. She championed my little story when I wanted to relegate it to the journal from whence it came, and with her encouragement I submitted it. And submitted it. And then one day it got some offers. ELSKER was going to be published. The whole world was going to read my journal, and I was an accidental novelist.

It’s been a steep learning curve, and a very crazy journey, but I’m really excited to share Kristia and Ull. I’ve never thought of myself as a writer -- and I still don’t -- but I have a lot of hopes. (1) I hope people actually read ELSKER. Ull’s a dreamboat and Kristia’s pretty fabulous, and have I mentioned I’m totally in love with them? (2) I hope anyone who does read ELSKER thinks the mythological Norse world is as fantastic as I do. With nine realms and scores of imaginary creatures, it’s an incredibly fun place to play. And (3) I hope anyone with a hankering for caffeine follows that craving to the nearest coffee-hut. You just never know where it might take you.

About the Author:
Before finding domestic bliss in suburbia, ST Bende lived in Manhattan Beach (became overly fond of Peet’s Coffee) and Europe… where she became overly fond of the musical Cats. Her love of Scandinavian culture and a very patient Norwegian teacher inspired the ELSKER series. She hopes her characters make you smile and that one day pastries will be considered a health food.

Be sure to stop by http://stbende.blogspot.com/ between April 11th and May 20th to enter to win fabulous prizes in the ELSKER Release Month of Giveaways!

Thanks so much for sharing this story with us, ST! I love how all your interests combined in the writing of this novel, and how it happened accidentally on purpose.