The Summer I Became a Nerd by Leah Rae Miller 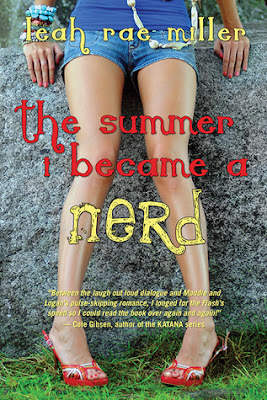 
Synopsis: (from Goodreads)
On the outside, seventeen-year-old Madelyne Summers looks like your typical blond cheerleader—perky, popular, and dating the star quarterback. But inside, Maddie spends more time agonizing over what will happen in the next issue of her favorite comic book than planning pep rallies with her squad. That she’s a nerd hiding in a popular girl's body isn’t just unknown, it's anti-known. And she needs to keep it that way.

Summer is the only time Maddie lets her real self out to play, but when she slips up and the adorkable guy behind the local comic shop’s counter uncovers her secret, she’s busted. Before she can shake a pom-pom, Maddie’s whisked into Logan’s world of comic conventions, live-action role-playing, and first-person-shooter video games. And she loves it. But the more she denies who she really is, the deeper her lies become…and the more she risks losing Logan forever.

My Thoughts:
‘The Summer I Became a Nerd’ was such a cute story about being yourself. Overall I really enjoyed it!

Sometimes it felt like Maddie was a bit over the top with how averse she was to anyone knowing the real her, but on the other hand I can understand how sensitive she was to how people viewed her, and how she wanted acceptance. High school can definitely be tough, and it’s a time when you’re discovering yourself and deciding who you want to be. It took Maddie a little longer than I would have liked to realize that being herself was the best way to live, but I still enjoyed reading about her journey.

I liked how the book shows that sometimes people can surprise you, and they aren’t necessarily what you would expect. The popular cheerleader can be into comic books, and the comic nerd just might be the best boy you’ll meet. Speaking of Logan, I just loved his character. It was so great to see the geeky nice guy as the hero who gets the girl he’s been crushing on. Bad boys can be fun, but I'm all about the sweet guys.

Conclusion? This was a cute and fun contemporary that I would definitely recommend.

The Cover:
It's cute, but a more nerdy cover would have been nice.

Find The Summer I Became a Nerd by Leah Rae Miller on Goodreads, Book Depository, & Amazon.