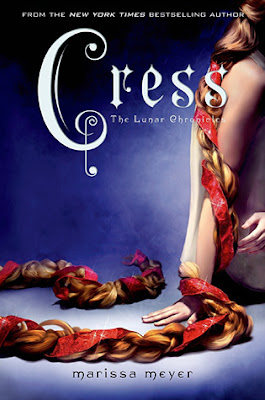 Rapunzel’s tower is a satellite. She can’t let down her hair—or her guard.

In this third book in the bestselling Lunar Chronicles series, Cinder and Captain Thorne are fugitives on the run, with Scarlet and Wolf in tow. Together, they’re plotting to overthrow Queen Levana and her army.

Their best hope lies with Cress, who has been trapped on a satellite since childhood with only her netscreens as company. All that screen time has made Cress an excellent hacker—unfortunately, she’s just received orders from Levana to track down Cinder and her handsome accomplice.

When a daring rescue goes awry, the group is separated. Cress finally has her freedom, but it comes at a high price. Meanwhile, Queen Levana will let nothing stop her marriage to Emperor Kai. Cress, Scarlet, and Cinder may not have signed up to save the world, but they may be the only ones who can.

My Thoughts:
Basically? This book is incredibly epic! If you haven’t read this series before now, I highly recommend you drop everything and pick up Cinder, Scarlet, and Cress right away.

The main plot of Cress centres around stopping a certain wedding, but, of course, there are many snags along the way. I’m honestly not sure how Marissa Meyer packs so much action into her books without having them feel rushed or busy. I was only a quarter of the way through the book when already so much had happened. Cress is the type of book that you want to keep reading and reading to see what will happen next, but you also want to savour it and not get any closer to the end, because it’s just so good, and getting to the end will mean an even longer wait until Book 4.

Marissa has managed, so far, to be three for three in creating incredible leading ladies, who are equally endearing, but so different from one another, too. Cress is such a lovely character. She's absolutely brilliant, but she's also a bit wide eyed and unsure around people, having been kept in a satellite all alone for years. Cress also has a massive crush on Captain Thorne, which makes their interactions super adorable.

I’m honestly not sure how to describe how much I love these books. They feature crazy action as well as romance and heartbreak (my heart was ACHING for one character while I worried about another). Cress, like Cinder and Scarlet, is intricately plotted, presenting multiple POVs effortlessly. I care about all of the characters so much, and reading these books is like journeying with a group of friends. I can’t recommend The Lunar Chronicles enough, and I'm incredibly eager for Winter, the conclusion to the series.