Behind the Scenes by Dahlia Adler 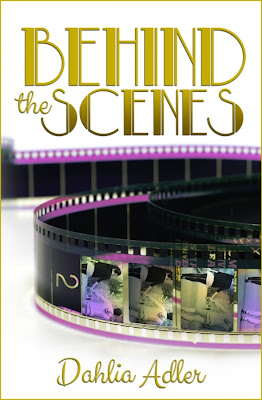 High school senior Ally Duncan's best friend may be the Vanessa Park - star of TV's hottest new teen drama - but Ally's not interested in following in her BFF's Hollywood footsteps. In fact, the only thing Ally's ever really wanted is to go to Columbia and study abroad in Paris. But when her father's mounting medical bills threaten to stop her dream in its tracks, Ally nabs a position as Van's on-set assistant to get the cash she needs.

Spending the extra time with Van turns out to be fun, and getting to know her sexy co-star Liam is an added bonus. But when the actors' publicist arranges for Van and Liam to "date" for the tabloids just after he and Ally share their first kiss, Ally will have to decide exactly what role she's capable of playing in their world of make believe. If she can't play by Hollywood's rules, she may lose her best friend, her dream future, and her first shot at love.

My Thoughts:
This may date back to my early teen years of reading fanfic, but I am a sucker for stories involving famous people, especially when they mix famous and non-famous people. Based on this, Behind the Scenes already seems like the perfect book for me. Thankfully this book lives up to its awesome concept. Behind the Scenes is so cute, charming, and swoony. It features moments of angst and major feels of all kinds. It’s basically a perfect Young Adult/New Adult hybrid. You have the friends, family, romance, and drama that make up great contemporary YA title, with the independent characters and the "what's next?" feel of a great NA read.

Maybe it shows how much of a mess I am, but I could totally relate to our main character, Ally, even when (or especially when?) she was a jealous, insecure mess. I just felt her pain and empathized with her situation. I also really appreciated how all the characters were culpable in the book’s drama. Each of them said or did stupid things: it wasn't just one person. The situation presented is a very complicated one, not something that could be solved with one simple conversation (which is one of my biggest pet peeves in books).

Behind the Scenes has so many great aspects to it, but the romance part was definitely my favourite. I loved how Liam and Ally bonded as friends with things in common before they got together. They had the connection with their parents, along with other things. Both of the characters were well developed. Ally had a lot of different layers to her, and many things she was dealing with in the book, and Liam was this super hot, popular celebrity, but his personality was so much different than what you might expect. The two of them had major chemistry, and I loved all their scenes together.

I highly recommend Behind the Scenes to all fans of contemp YA, but especially to those who enjoyed Open Road Summer. The two are very different stories, but they make perfect readalikes, with a plotline in common (working alongside famous best friend, falling for a famous person in said friend's orbit). Overall, this was a fabulous book that I very much enjoyed.

The Cover:
Not my fave.