The Year We Hid Away by Sarina Bowen (Review, Excerpt, & Giveaway) 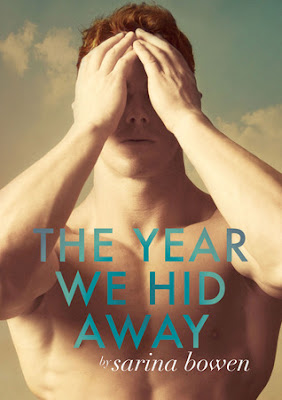 Scarlet Crowley’s life was torn apart the day father was arrested for unspeakable crimes. Now the shock has worn off, but not the horror.

It’s a safe bet that Scarlet is the only first year at Harkness College who had to sneak past TV news trucks parked on her front lawn just to leave town. But college will be Scarlet’s fresh start. Clutching a shiny new student ID — with a newly minted name on it — she leaves it all behind. Even if it means lying to the boy she’s falling for.

Bridger McCaulley is a varsity hockey star known for being a player both on and off the ice. But a sobering family crisis takes that all away. Protecting his sister means a precarious living arrangement and constant deception. The only bright spot in his week is the few stolen hours he spends with Scarlet.

The two form a tentative relationship based on the understanding that some things must always be held back. But when grim developments threaten them both, going it alone just won’t work anymore. And if they can’t learn to trust one another now, the families who let them down will take everything they’ve struggled to keep.

My Thoughts:
I absolutely loved Sarina Bowen’s first New Adult novel, The Year We Fell Down, so I was thrilled to be an early reader for The Year We Hid Away. I’m also excited to say that I loved this book just as much as the first one. You can read this book as a standalone, but I highly recommend you read The Year We Fell Down first because of how great it is, and to get an introduction to the college and to some of the characters.

Bridger is a secondary character in the first book, one of Hartley’s best friends, and here he’s the hero of the novel. The Bridger we got to know in Book 1 is into one night stands and partying. He’s not a jerk, but he doesn't want to be tied down. We see a hint of a deeper side with how he cares for his sister and his friends, but he’s mostly portrayed as a good time guy. The Bridger we get to know here is fundamentally the same guy, in that he still has the same good heart and cocky sweetness that we saw glimpses of before. However, Bridger has made a lot of changes, too. We get to see deeper into his life and to why he’s made the choices he has in the past with girls, etc. Mostly, we see who Bridger chooses to be when he's put in a difficult situation.

Scarlet is someone who's also in a crazy tough position. She's being judged for who her father is, having to deal with it in a very personal way. She has a lot of stress in her life because of this. Scarlet blames herself for not knowing about things that happened when she was a kid. Despite all the drama that's imposed on her, Scarlet manages to be a sweet and caring girl, though definitely one who holds herself back.

Bridger is the one person who Scarlet really connects with right away, and Scarlet is someone who Bridger could see himself opening up to, if only his life was simpler. These two are sweet together from the beginning. I loved the romance and the sexy scenes, but I also loved the friendship that Scarlet and Bridger build. One of the best parts of the book is their encouragement of one other and how they help each other deal with the things going on in their lives.

I was worried I would miss the two main characters from the first book since I loved their story so much, but very quickly that fear went away. First of all, there was just the right amount of cameos from Hartley and Corey. They were a part of the story, but not major players, and it ended up being the perfect balance. Second of all, Sarina Bowen managed to write new characters, or in Bridger’s case, a former secondary character, who you want to keep spending time with. It takes talent for authors to create characters you like as much as, or perhaps more than, the ones you first fell for, but that was the case here.

This is a New Adult book that has characters trying to figure things out, like every book of this category should, but it also has the characters dealing with situations that make them way more mature than others their age. Another aspect I enjoyed was that there was still a hockey focus to the book, even though Scarlet and Bridger were both "former hockey players" during the book. I also loved Bridger’s relationship with his little sister, Lucy. The way he cared about her was incredibly special.

The Year We Hid Away is sweet, romantic, funny, and sexy. Sarina Bowen has the ability to make me cry and feel things for her characters on an intense level. If you’re looking for a well-written New Adult romance that has a deeper level to it, I highly recommend you pick up The Year We Hid Away, and the first novel in the series, The Year We Fell Down. These are romances, definitely, but they are also about these characters as individuals, journeying to triumph over difficulty.


EXCERPT:
“Stalker,” Bridger said, cocking one ginger eyebrow at me. “I need to hear you play.”

He crossed his arms, and I was momentarily distracted by the curved shape of his forearm muscles. “Favor? What’s this going to cost me?”

“Well… could you stop calling me Stalker?” I knew my objection to his nickname was a little silly. But the past year had made me sensitive to anything even remotely creepy.

His green eyes went wide. “Sure. That’s it?”

My hands felt a little sweaty, and I had to wipe them on my jeans. I shouldn’t have been nervous, because I spent a lot of restless hours last year playing the living crap out of my guitar. When nobody at school will speak to you, and there’s a full drama playing inside your house, there is really no better way to spend time than practicing music. But still, I was anxious to impress.

Putting the guitar strap over my head, I checked my tuning. Then I launched in to Lynyrd Skynyrd’s Sweet Home Alabama. With its distinctive opening riff, I knew it would sound impressive. And I’d played it a hundred times before.

I kept my eyes on the fret board, not because I needed to look, but because I felt shy. After the first few bars I began to relax, the music pulling me in.

When the song was done, I waited until the last note died away. And then I couldn’t avoid his face any longer. Bridger was looking down at me with big eyes, dark green, the color of the sea before a storm. “Damn, Scarlet,” he whispered. “You amaze me.”

My cheeks did their thing, becoming hot. I busied myself with removing the guitar strap from around my neck. But I fumbled it, twisting my hair in the strap. “Ouch,” I swore.

Bridger reached up to untangle me, and I felt my status tumble quickly from “possibly cool” right down to “dork.” But just as I was beating myself up about it, I noticed something peculiar. After Bridger pushed my tangled hair off my shoulder, his hand stayed there, warming my skin. Then, his fingers cupped my cheek. My gaze flew to his, and I found him studying me.

Ever so slowly, he leaned in. Then his lips barely whispered across mine, and I felt myself break out in goose bumps. But he didn’t kiss me properly. Instead, his lips came to hover over the corner of my mouth, a spot on my body which I’d never guessed was so sensitive. “Is this okay?” he whispered, his lips so close that I could feel the words vibrate on my skin. “I find you a little hard to read.”

Hell yes. But I didn’t trust my voice to answer him. Instead, I turned my face the tiniest distance towards his, hoping he’d understand. My heart slammed against my ribs as his mouth found mine…

Amazing, right?? Now here's a little bit more about Sarina and her books:

Sarina Bowen makes her home in the Green Mountains of Vermont, where she lives with her family, eight chickens and a large pile of skis and hockey equipment. She is a graduate of Yale University.

Q: Is Harkness College from the Ivy Years series based on Yale?
A: Heck yes! But it’s based on a Yale which has gone soft and fuzzy in my mind, in all the best ways. So I’ve fictionalized it to avoid the errors and inaccuracies that I’d be likely to make if I tried to get everything just right.

Q: How many Ivy Years books do you have planned?
A: Five, if you’re counting the novella. After Bridger’s book, a novella is planned for one of Scarlet’s roommates. (Blond Katie.) The title is Blond Date (Ivy Years 2.5), and it’s funny as heck. Book 3 will be titled The Understatement of the Year, and it’s a heartbreaker. Book 4 is still a secret! You can read a bit more about these titles on The Ivy Years page on my website.

Q: How are the Gravity books different from The Ivy Years?
A: The Gravity books are a heck of a lot steamier than my New Adult titles. And book #1 is angstier, in my opinion. They’re set in Vermont, featuring top-level snowsports athletes. That part is so much fun for me, because we really do have a lot of awesome athletes that live up here. Today my husband spotted Olympic medalist Hannah Kearney in the grocery store. That’s the kind of celeb sightings we have on the Vermont / New Hampshire border.

Q: How did you come to write romance?
A: I’ve always loved novels—all kinds of novels. And my goal is to make the reader do three things when she’s reading my book: cry, laugh, and sigh. Romance is the best vehicle for that goal, and I’ve really enjoyed the ride.