The Royal We by Heather Cocks & Jessica Morgan 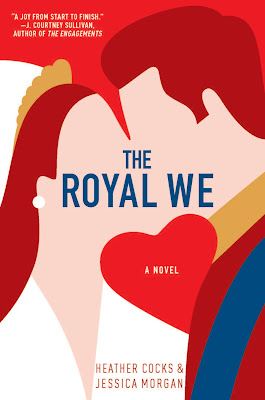 "I might be Cinderella today, but I dread who they'll think I am tomorrow. I guess it depends on what I do next."

American Rebecca Porter was never one for fairy tales. Her twin sister, Lacey, has always been the romantic who fantasized about glamour and royalty, fame and fortune. Yet it's Bex who seeks adventure at Oxford and finds herself living down the hall from Prince Nicholas, Great Britain's future king. And when Bex can't resist falling for Nick, the person behind the prince, it propels her into a world she did not expect to inhabit, under a spotlight she is not prepared to face.

Dating Nick immerses Bex in ritzy society, dazzling ski trips, and dinners at Kensington Palace with him and his charming, troublesome brother, Freddie. But the relationship also comes with unimaginable baggage: hysterical tabloids, Nick's sparkling and far more suitable ex-girlfriends, and a royal family whose private life is much thornier and more tragic than anyone on the outside knows. The pressures are almost too much to bear, as Bex struggles to reconcile the man she loves with the monarch he's fated to become.

Which is how she gets into trouble.

Now, on the eve of the wedding of the century, Bex is faced with whether everything she's sacrificed for love-her career, her home, her family, maybe even herself-will have been for nothing.

My Thoughts:
Oh my word!!!! This book was epically good. It put me through the ringer, made me a complete emotional mess. The Royal We took me from giddy to butterflies in the stomach to anxious to angry to heartbroken to hopeful to happy and everywhere in between. I can honestly say this is the best book I've ever read involving royalty and involving dealing with the press and paparazzi.

What surprised me most about this book is that it has some serious weight to it. Just based on the genre you’d expect a story like this to be on the shorter side, but nope, this is an extremely long book. Despite the length I could not set it down: I just kept reading and reading, which shows you how involved with the book I was.

The Royal We is a linear story with five different sections, set at different times. The story starts with Bex meeting Nick at Oxford and their friendship that becomes more. We see different stages of their courtship and all the aspects that come with that. I loved Bex and Nick together but this book made me question whether being with him was worth it for Bex: the expectations, the judgment, the ceremony, the never having a normal life. This is really the big question of the novel: is it worth giving up so much to be with someone you love? & Can you make it through the horrible and still have something worthwhile left?

This book does such a good job at showing us a royal family that we can easily identify as a version of our own, while equally making the characters different and truly themselves. It has some incredibly amazing secondary characters, some you'll love (Freddie!!! Oh gosh, I could go on and on about Freddie), some you'll loathe (Richard!! aka Evil Prince Dad), and some it's so complicated you're not even sure (Bex’s sister, Lacey). I mean, these characters are totally layered and complicated. Even Richard you can feel a twinge of sympathy for at times, though mostly he's just Prince Dick.

If I had one complaint about this book it would be that I wanted more cute Bex/Nick scenes to make up for the angst and/or a longer ending so we could see people’s reactions and how everything went down (do these things missing mean there'll be a sequel? *optimistic*). However, the way it ended was perfect too. It felt like a very Nick and Bex ending, instead of an ending for HRH and Future Duchess Rebecca.

By now it’s clear that this book made me feel So Many Feelings. I just loved every bit of it, even when I was so tense it made my stomach upset or when tears were continually streaming down my face. This is the first book in a while where I've felt SO strongly about loving it. The Royal We is an AMAZING read, one I would highly recommend to all contemporary romance fans, New Adult fans (after all, this book is truly about growing up and finding yourself, making those tough decisions), and to fans of books about royalty and/or celebs. I honestly can’t recommend this book highly enough.