The Winner's Crime by Marie Rutkoski 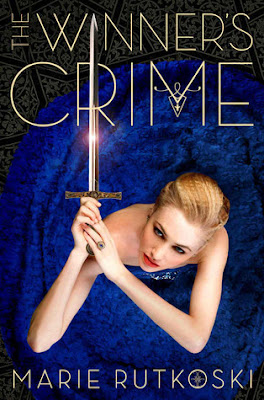 Book two of the dazzling Winner's Trilogy is a fight to the death as Kestrel risks betrayal of country for love.

The engagement of Lady Kestrel to Valoria’s crown prince means one celebration after another. But to Kestrel it means living in a cage of her own making. As the wedding approaches, she aches to tell Arin the truth about her engagement... if she could only trust him. Yet can she even trust herself? For—unknown to Arin—Kestrel is becoming a skilled practitioner of deceit: an anonymous spy passing information to Herran, and close to uncovering a shocking secret.

As Arin enlists dangerous allies in the struggle to keep his country’s freedom, he can’t fight the suspicion that Kestrel knows more than she shows. In the end, it might not be a dagger in the dark that cuts him open, but the truth. And when that happens, Kestrel and Arin learn just how much their crimes will cost them.

My Thoughts:
The Winner’s Crime is an intense sequel to The Winner’s Curse and it is so, so good. It’s very much a second book, in that things don't get resolved, more problems arise, and there's definitely not any happy shipping moments. Despite this, the plot moves forward beautifully and the emotional intensity was at a high for the the whole book.

Kestrel is determined to keep Arin safe by keeping him out of the loop. She plays a very dangerous game, loving Arin and wanting to help him (and his people, by extension), while under the watch of the emperor and the threat of her father. This book is full of courtly intrigue and Kestrel's extreme intelligence in doing everything she can for Arin without him knowing and without getting caught. I would have liked to see Kestrel and Arin working together, but I get why things were the way they were.

In this second book we also see how Arin's people, the Herrani, are surviving and what the Valorians are doing to another people in the east. There’s so much evilness in this empire that is always wanting to expand.

I can’t stop using the word intense to describe this book, because it’s such a perfect descriptor. My stomach was in knots almost the whole time reading The Winner’s Crime. Marie Rutkoski is such a talented writer. Her words are beautiful, and she does an amazing job at portraying the subjugated and the subjugators in a slave based empire. I can’t even explain how highly I recommend this series, and I am on pins and needles waiting for the arrival of the third book (which will hopefully have some happier moments in it!).