A World Away by Nancy Grossman 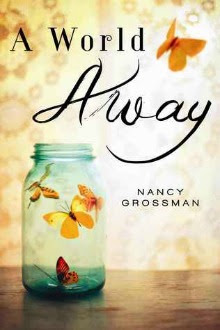 Synopsis: (from Goodreads)
A summer of firsts
Sixteen-year-old Eliza Miller has never made a phone call, never tried on a pair of jeans, never sat in a darkened theater waiting for a movie to start. She's never even talked to someone her age who isn't Amish, like her.

A summer of good-byes
When she leaves her close-knit family to spend the summer as a nanny in suburban Chicago, a part of her can't wait to leave behind everything she knows. She can't imagine the secrets she will uncover, the friends she will make, the surprises and temptations of a way of life so different from her own.

A summer of impossible choice
Every minute Eliza spends with her new friend Josh feels as good as listening to music for the first time, and she wonders whether there might be a place for her in his world. But as summer wanes, she misses the people she has left behind, and the plain life she once took for granted. Eliza will have to decide for herself where she belongs. Whichever choice she makes, she knows she will lose someone she loves.

My Thoughts:
I have to admit that my first reason for wanting to read this book was because I was obsessed with the Angels trilogy by Lurlene McDaniel when I was younger. I don’t know if I would enjoy those books now, but I still remember feeling enthralled with those characters and with the Amish lifestyle presented. ‘A World Away’ does give us glimpses of the Amish traditions, but it’s more about Eliza discovering herself when she chooses to become part of the ‘English’ world for a summer.

I’m curious to know if Eliza’s reactions to the English world were accurate, with her not knowing about things like texting or how to use a phone, especially if her and her friends have snuck Seventeen magazines like she mentions. Maybe I’m a bit skeptical because I personally know of Mennonites who have cell phones or use electricity and technology as long as it’s not in front of the elders, but I guess there’s also a big difference even between Old Order Mennonites and the Amish.

What I really liked about this book is that most anyone could identify with Eliza’s feelings, because I think we’ve all questioned at one time or another where we belong. And that was the strength of this book for me. Despite the love triangle-ish aspect to the book, it was never a question of returning to sweet Daniel or staying in the English world for Josh (who was a pretty lacklustre love interest, I gotta say). It was about Eliza discovering herself and exploring what she truly wanted. In the end I think a bit more time could have been taken to explain Eliza’s decision, but I still liked how confident Eliza was and how no matter where she ended up she was strong and able to stand up for herself. Despite some stereotypical characters and scenarios, I really liked the themes in this book and enjoyed the book overall.

The Cover:
So pretty!

Find A World Away by Nancy Grossman on Goodreads, Book Depository, & Amazon.