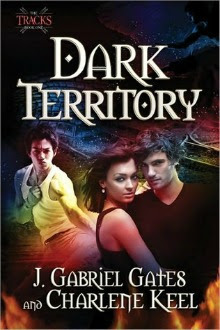 Synopsis: (from Goodreads)
Star-crossed love, supernatural evil, and martial arts meet at the abandoned tracks in the deceptively quaint village of Middleburg . . .

When Ignacio Torrez moved from the rough streets of Los Angeles to a small town dead smack in the middle of nowhere, he never expected to find himself in the midst of a gang war. But, he soon learns, these are no ordinary gangs. The wealthy, preppie Toppers on one side of the tracks and the working-class Flatliners on the other adhere to a strict code of honor and use their deadly martial arts skills, taught to them by the wise Master Chin, to battle one another for pride, territory, and survival. When Raphael, leader of the Flatliners, falls forAimee, a Topper girl, the rival gangs prepare for a bloody, all-out war. The only hope for peace between them lies within the dark territory of the abandoned train tunnels where the tracks cross. Under the direction of the mysterious and frightening Magician, the awesome power within the crossing sends the rivals on a terrifying mystical quest to fight the malevolent force that threatens the existence of Middleburg-and quite possibly, the world.

My Thoughts:
I was definitely intrigued when I first read the description of this book, with all those different elements. And it turns out that ‘Dark Territory’ blends genres well. It has a contemporary high school setting, and yet there’s also a paranormal/mystical element going on in the background of the town, and with the rival gangs there’s also an action/martial arts element to it. You also can’t forget the forbidden romance between Raphael and Aimee. Somehow all of these aspects work well together, and they provide an intriguing backdrop for the war between the Flatliners and the Toppers.

I feel like this book has a lot of promise, and it does live up to most of it. I just feel like in a book that’s so long (around 500 pages) the authors could have done a better job of giving background information and context. I loved the main characters that we got to know, but because of all the different characters and perspectives I felt like our knowledge of the characters was limited. Unfortunately the book also felt long, I think because of all the side-plots and drawn out scenes. There is such great action in the second half of the book, and I wish it hadn’t taken as long for the book to get going.

Will I read the 2nd book in this series? I definitely will. I love the idea behind this this book, even if some of gang-related plot felt far fetched, and I liked the characters enough that I'm really intrigued to see what happens next.

The Cover:
I definitely like the feel & the colours, but omigosh that couple is EVERYWHERE!

This book was reviewed for the Dark Territory/Ghost Crown blog tour hosted by TLC Book Tours. You can find the whole tour schedule here.