Size 12 and Ready to Rock by Meg Cabot 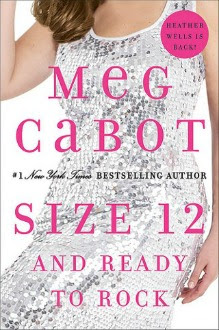 Synopsis: (from Goodreads)
Summer break . . . and the livin' ain't easy

Just because the students at New York College have flown the coop doesn't mean assistant residence hall director Heather Wells can relax. Fischer Hall is busier than ever, filled with squealing thirteen- and fourteen-year-old girls attending the first ever Tania Trace Teen Rock Camp, hosted by pop sensation Tania Trace herself--who just happens to be newly married to Heather's ex-boyfriend, heartthrob Jordan Cartwright. But the real headache begins when the producer of a reality TV show starring Tania winds up dead . . . and it's clear that the star was the intended victim.

Grant Cartwright, head of Cartwright Records, wants to keep his daughter-in-law (and his highest-earning performer) alive. So he hires his oldest son, black sheep of the family and private investigator Cooper Cartwright--who just happens to be Heather's "new" fiancE. Heather should leave the detecting to Cooper. But with a dorm full of hysterical mini-divas-in-training, she can't help but get involved. And after Tania shares a really shocking secret with her, "this" reality suddenly becomes more dangerously real than anyone ever anticipated.

My Thoughts:
I love these books! Seriously, they are so much fun. It’s been such a long time since the last one (Big Boned, in 2007) that I was worried that without re-reading the previous books I wouldn’t be as into the story, but thankfully that wasn’t the case at all. I fell right back into the story and the characters, and I think that even without reading the previous books you would be able to pick this one up and understand everything going on.

Heather was just as fun and awesome a character as I remembered her being, and I love how she’s quirky and fun without being too stereotypical. I also loved the romance angle, even though it wasn’t a huge part of the book, because Heather and Cooper are all kinds of adorable.

Having mysterious deaths occuring at Heather’s workplace over and over again could get tired, even at a place dubbed 'Death Dorm', but I think the way that Meg Cabot introduced another mystery at the residence hall was really smart. I loved how it brought Tania and Jordan into the story more, because those two are crazy and absolutely hilarious.

All in all this was a great new installment, and I can’t say enough good about this series. It’s so much fun and the books always have a good mystery/intrigue element to them, while still containing the romance and humour you would expect from a Meg Cabot book. While this is an adult series I think it would appeal to most teens, especially with the main character working at a college dorm.

The Cover:
Nothing special, but it is cute & blingy.