What Happens Next by Colleen Clayton 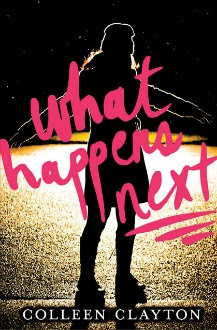 Synopsis: (from book jacket)
Before the ski trip, Cassidy "Sid" Murphy was a cheerleader (on the bottom of the pyramid, but still...) and a straight-A student, with two of the best friends a girl could ask for.

When Sid finds herself in a ski lift with hunky local college guy Dax Windsor, she's thrilled. "Come to a party with me," he tells her, but Dax isn't what he seems. He takes everything from Sid - including a lock of her perfect red curls - and she can't remember any of it.

After the ski trip, Sid is an insomniac and an obsessive late-night runner, unable to relate to anyone.

Caught in a downward spiral, Sid drops her college prep classes and takes up residence in the A/V room with only Corey "the Living Stoner" Livingston for company. But as she gets to know Corey - slacker, baker, total dreamboat - Sid finds someone who truly makes her happy. Now, if only she could shake the nightmares, everything would be perfect...

Witty and poignant, Colleen Clayton's debut is a stunning story of moving on after the unthinkable happens.

My Thoughts:
‘What Happens Next’ is a quietly powerful book. I haven’t heard a lot of buzz for this one, but I hope that changes, because this is a tremendous debut novel. Colleen Clayton isn’t afraid to touch upon some tough issues, but I felt like she handled everything very responsibly. This doesn’t feel like an “issues” book, it just feels like the story of what happened to Sid, and, more importantly, who Sid is.

Sid is an interesting character, because she has a lot of different sides to her. She's tough and snarky and totally in control of who she is, and yet she's also very sensitive about how others see her, especially when it comes to her figure. Sid’s want for control was something that turned destructive as she fought to deal with something terrible, and yet she sometimes even fights her impulses. I loved the contradictions of Sid, but I mostly loved her spirit.

I also adored the romance of the story. It didn’t feel like it was just thrown in there: it was a real relationship developing over the course of the book. I loved how true and deep the feelings seemed, and how strong the two characters were together. This relationship was amazing to read about, especially as the friendship angle was lacking. This was the one part of the book that I was a bit disappointed in. The whole “girl loses friends after going through something difficult” scenario is so common in books, that I would have preferred something different and surprising.

Overall, though, I wholly recommend ‘What Happens Next’. The writing is strong, and the whole story comes across as so vivid. An extremely strong debut: I’ll definitely be keeping this author on my radar.

Find What Happens Next by Colleen Clayton on Goodreads, Book Depository, & Amazon.