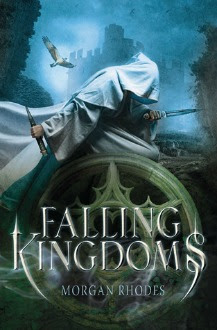 Synopsis: (from Goodreads)
In a land where magic has been forgotten but peace has reigned for centuries, a deadly unrest is simmering. Three kingdoms grapple for power—brutally transforming their subjects’ lives in the process. Amidst betrayals, bargains, and battles, four young people find their fates forever intertwined:

Cleo: A princess raised in luxury must embark on a rough and treacherous journey into enemy territory in search of a magic long thought extinct.

Jonas: Enraged at injustice, a rebel lashes out against the forces of oppression that have kept his country impoverished—and finds himself the leader of a people’s revolution centuries in the making.

Lucia: A girl adopted at birth into a royal family discovers the truth about her past—and the supernatural legacy she is destined to wield.

Magnus: Bred for aggression and trained to conquer, a firstborn son begins to realize that the heart can be more lethal than the sword...

The only outcome that’s certain is that kingdoms will fall. Who will emerge triumphant when all they know has collapsed?

My Thoughts:
What drew me into this book was the epic fantasy feel of the description and the cover. The back of the book describes it as being a good read for fans of Graceling and Game of Thrones, and I would agree. The world in this book had that type of feel, and it was especially Game of Thrones-like with all the infighting, scheming, and oh yeah, a little bit of (not actual in this case) incest.

What was exciting about this book was the politics of the three kingdoms. When you begin the book you wonder how the kingdoms will be connected, and when and how the characters will meet up. Once you begin to see the relationships that these kingdoms have you start to wonder which kingdom might come out on top. There’s a lot of action, and it definitely kept me reading.

There are the four perspectives, as described by the book description, although I definitely felt like Cleo, Magnus, and Jonas were the main POVs. Unfortunately because each perspective only gets a certain amount of space in the book I didn’t really feel connected to the characters. At some points in the book some very heartbreaking things were occurring, and yet I didn’t really feel emotional about them. It was almost like I was a clinical observer of the characters and their world, rather than being an active participant, which I think is the ideal.

Despite my lack of emotional connection to this book I really liked the world and the plot enough that I wouldn’t hesitate to pick up book 2. I think if you’re just delving into high fantasy ‘Falling Kingdoms’ would be a good introduction, as you get to experience the political game of thrones and the hints of magic. ‘Falling Kingdoms’ leaves off with an interesting set-up for book 2, leading me to believe that the second book will be even more exciting and interesting.

The Cover:
Kind of epic, I think it fits the book well.