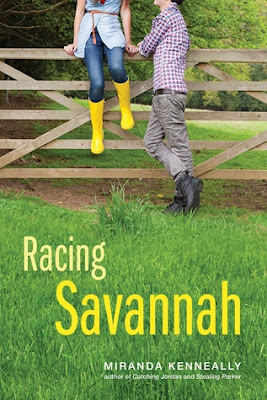 He lives in the estate house, and she spends most of her time in the stables helping her father train horses. In fact, Savannah has always been much more comfortable around horses than boys. Especially boys like Jack Goodwin—cocky, popular and completely out of her league. She knows the rules: no mixing between the staff and the Goodwin family. But Jack has no such boundaries.

With her dream of becoming a horse jockey, Savannah isn’t exactly one to follow the rules either. She’s not going to let someone tell her a girl isn’t tough enough to race. Sure, it’s dangerous. Then again, so is dating Jack…

My Thoughts:
Miranda Kenneally’s books have a style to them, a particular quality that make them so inherently readable. I love her conversational style of writing -- it makes her books so easy to delve into, and so enjoyable to read. This, her fourth book, focuses on the world of horse racing, something I know absolutely nothing about. I was happy to find myself interested in the subject (you almost can’t help it, it being something Savannah is so passionate about), but not overwhelmed by details or facts.

Our main pair for this book is Savannah and Jack, who are involved in a bit of a forbidden romance, since Savannah is part of the staff at Jack’s family’s farm. There’s a huge class difference between them, and a question of appropriateness since their parents do not approve. That undercurrent about class/money was definitely well written. It showed how having money doesn't mean you have class, but that it also doesn't indicate that you're a snob or a jerk. There was the same message about having less money: that just because that’s the case, it doesn’t mean you’re worth any less. The relationship in Racing Savannah was less swoony (for me) than in past books, but I still really liked these two together. It took some definite growth on both Savannah and Jack’s parts, but I feel like they ended up in a good place.

I really love how Miranda Kenneally brings back characters from past books for more than just two second cameos. There are major characters in this book that are siblings of past main characters, and without getting too spoilery, we get a wedding (!) for a past couple and an engagement for another. I can always picture the couples together in the future, finding weddings and engagements plausible, because the characters (including the ones from this book) are always such great friends. There’s so much more to their relationships than sexual chemistry.

In that regard, I think that Miranda Kenneally’s books are always very honest about sex and the emotions involved in it. They’re realistic about sexual activity, but it’s not presented in a tawdry or cheap way. It talks about how things can be good, but that you can also feel regret if things happen without a commitment. The book basically tells the characters (and the reader by default) that they are worthy, and that they deserve whatever it is they want from a relationship.

I’m a huge fan of Miranda Kenneally’s books: she is an auto-buy author for me. I definitely recommend Racing Savannah to fans of YA contemporary romance, but also for fans of sports books, or fans of just about any type of book that features strong relationships and a good message, without it being preachy in any way.

The Cover:
I'm not that keen on the yellow, but I still really like it.