Today I have a double dose of Entangled Bliss for you! 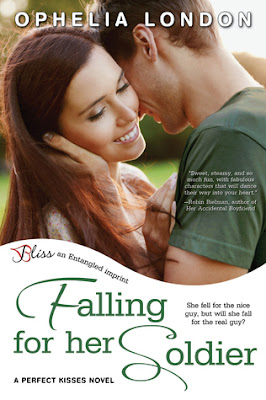 She fell for the nice guy, but will she fall for the real guy?

Ex-ballerina Ellie Bell has twenty-four days left until her self-imposed man-less year is up. No more falling for the wrong kind of guy—charming, sexy, bad. Why can’t she find someone sweet like Charlie Johansson, her soldier pen pal? His e-mails meant the world to her, and she can’t stop thinking about him…until she meets Hunter, whose muscles and cocky smile threaten to have her relapsing.

Before Charlie “Big Game Hunter” Johansson’s last tour of duty, he’d gone through women like crazy. But after connecting on a real, emotional level via letters with his best friend’s sister, Charlie’s ready for a relationship—with Ellie Bell. But then her brother introduces him as Hunter. Proving he’s no longer a player by becoming Ellie’s dance partner for an Army benefit seems like it could convince both siblings he’s changed, but the harder he falls for Ellie, the harder it is to come clean. Can he convince her to fall for the real him before it’s too late?

My Thoughts:
Falling for Her Soldier was a cute read overall. Ellie and Charlie were definitely very adorable together. I liked reading about their talks and their dance practices. A lot of times with books like this I find myself asking “Why don’t you just tell the truth??”, and that was definitely the case here. However I did think there was enough outside interference from Ellie’s brother that I could buy the scenario to an extent.

You know how sometimes there’s one aspect of a book that probably shouldn’t be your main focus, but it bugs you so much you almost can’t focus on anything else? Yeah. I had that happen here. Ellie is supposedly planning this benefit for the centre where soldiers and veterans gather, and yet besides her dance with Hunter you don't see her working on anything. What’s up with that? Did she delegate? Where did these magical volunteers come from, and how was stuff donated? As someone who's planned events and has worked for a non-profit hosting a big fundraising event it was annoying to have everything glossed over. Yes there was mentions of press for the event, but what about all the work it took to get the event planned? All it would have taken was a few mentions here and there. You don’t need scenes of characters going door to door to business or anything, but on the opposite end of the spectrum to have this important aspect completely ignored was quite strange. Okay, end rant.

Beyond this detail which bugged me and that probably most people wouldn’t even pick up on (!), this was a decent enough read overall. It had its fun aspects, it held my attention, and it was a quick and easy read.

The Cover:
Not my fave. 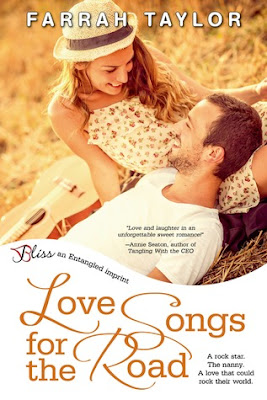 A rock star. The nanny. A love that could rock their world.

The only thing rock star Marcus Troy loves more than making music is his kids. So finding just the right nanny to take on tour with them is important—as is proving to his ex he deserves joint custody. Falling for his employee wouldn’t just be fodder for the paparazzi: it could ruin everything.

Too bad the perfect nanny turns out to be beautiful, vibrant Ryan Evans. Ryan’s never left her small Montana town before, so she jumps at the chance to see the country. And as much as accidental fame doesn’t gel with shy Ryan, what does is her relationship with her capricious, smoking-hot, shockingly good dad of a boss. Marcus is nothing like what she expected. But when the whole world’s watching them, will life in the spotlight be too hot to handle?

My Thoughts:
This was such a sweet story, one I had a lot of fun reading. Probably my favourite part of the book was how Marcus was such a different character than you would expect from a rock star love interest. Marcus is this thoughtful guy who loves playing music and loves his fans, but he's not into the rocker lifestyle. He’s all about his kids and keeping them happy and safe.

The chemistry between Ryan and Marcus was really fun right from the beginning. There’s a bit of a forbidden aspect to their relationship, with Marcus going through tough custody issues and Ryan being a part of his staff. I liked how once the “forbidden” nature of their relationship was out of the way, though, there wasn’t a ton of drama between them. I liked reading about characters who not only cared for one another, but also really trusted each other. The only question to the relationship is if Ryan, a small town girl with dreams of her own, can deal with constantly being in the spotlight and judged for who she loves.

There are a lot of great aspects to this book, including the addition of the kids and seeing both characters interact with them. Seeing the progression of a romance happen while on a rock tour was another fun part of the book. Overall: a fun and sweet novel that was just what I wanted at the moment I read it.