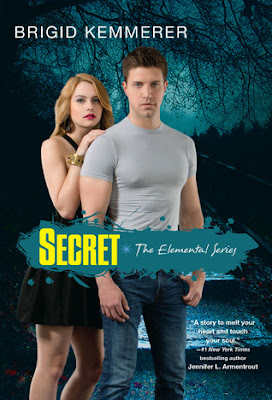 And then Quinn takes to hanging around his sworn enemy, and an Elemental Guide is counting the hours until he can try again to kill the Merrick brothers. Storms are brewing. On all sides.

SECRETS IN THE WIND. DANGER IN THE AIR.

My Thoughts:
Secret is the fourth full novel in Brigid Kemmerer’s Elemental series, and it primarily focuses on Nick, the twin brother of Gabriel, who narrated Book 2, Spark. Secret is also largely Quinn’s story, giving the book a female perspective as well.

I have to say that Secret is possibly the most romantic book of the series yet, telling the story of Nick and Adam. These two have an awesome connection, one where they share their deepest secrets and thoughts. Throughout the book I was just aching for Nick, watching him learn to accept himself and struggling to do what he wants instead of thinking of others first. Probably the most painful part to read is Nick’s fear of how his family will respond to his sexuality. Even as he comes to terms with his identity internally, this fear remains rooted deep inside.

Quinn is a character who we've seen through Becca, her best friend, and also through Gabriel, who can't stand her. Personally I never found her to be a likeable character at all. But seeing her perspective? Wow! In this book I just fell for her character, wanting to sweep her up and protect her. It almost physically hurt to see the way her mother and brother treated her, and I wanted so badly for her to find the love and acceptance that she so deeply craved. I won’t spoil it, but I was intrigued by the person who challenges Quinn and forces her to be honest about her situation. This is a character who has hidden depths that you never would have expected.

While this book is primarily focused on the relationships and internal struggles of Nick and Quinn, there's always the feeling of being watched and the fear of what could be next in the Elemental struggle. The prologue of the book features the new Guide in town, and while it’s not until close to the end when things ramp up action-wise, the whole book definitely has an intense feel to it.

Brigid Kemmerer gets better and better with each book. Her characters are ones that leap to life on the page, coming across like real people who you care about. The Elemental series is one of my favourites, and I can’t wait to see what happens next with the Merrick clan and with the struggle against the Guides.

The Cover:
The only thing about this series that is less than fabulous? The covers.