The Promise of Amazing by Robin Constantine 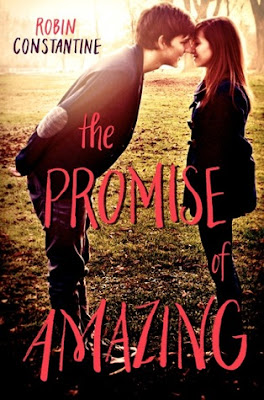 Wren Caswell is average. Ranked in the middle of her class at Sacred Heart, she’s not popular, but not a social misfit. Wren is the quiet, “good” girl who's always done what she's supposed to—only now in her junior year, this passive strategy is backfiring. She wants to change, but doesn’t know how.

Grayson Barrett was the king of St. Gabe’s. Star of the lacrosse team, top of his class, on a fast track to a brilliant future—until he was expelled for being a “term paper pimp.” Now Gray is in a downward spiral and needs to change, but doesn’t know how.

One fateful night their paths cross when Wren, working at her family’s Arthurian-themed catering hall, performs the Heimlich on Gray as he chokes on a cocktail weenie, saving his life literally and figuratively. What follows is the complicated, awkward, hilarious, and tender tale of two teens shedding their pasts, figuring out who they are—and falling in love.

My Thoughts:
Grayson and Wren are two people who don't fit together on paper. Wren is the quiet good girl and Gray is the popular party boy with a past. What’s good about this book is that it shows how both characters are so much more than their labels, and how people who seem so different can really “get” one another.

I liked this story overall. Gray is trying to move on from events and people in his past and having them come back to haunt him. Meanwhile, Wren is trying to determine who she is, wanting to be seen as more than the “quiet girl”. The setting of the novel was fun, having it based around the Camelot, an events hall that Wren’s family owns.

I thought that Wren and Gray were cute together, but I wished the book showed more moments between them, especially of them getting to know one another better. I would have liked more examples of why they fit, instead of having it told to me.

I found The Promise of Amazing to be enjoyable overall, but it wasn’t a real standout. I would probably pass this one over, unless you’re an absolute fangirl for YA contemp stories.