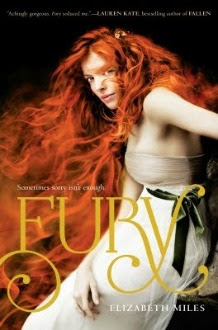 Synopsis: (from Goodreads)
Sometimes sorry isn't enough....
It’s winter break in Ascension, Maine. The snow is falling and everything looks pristine and peaceful. But not all is as it seems...

Between cozy traditions and parties with her friends, Emily loves the holidays. And this year’s even better--the guy she’s been into for months is finally noticing her. But Em knows if she starts things with him, there’s no turning back. Because his girlfriend is Em’s best friend.

On the other side of town, Chase is having problems of his own. The stress of his home life is starting to take its toll, and his social life is unraveling. But that’s nothing compared to what’s really haunting him. Chase has done something cruel...something the perfect guy he pretends to be would never do. And it’s only a matter of time before he’s exposed.

In Ascension, mistakes can be deadly. And three girls—three beautiful, mysterious girls—are here to choose who will pay.

Em and Chase have been chosen.

My Thoughts:
‘Fury’ is arguably one of the most hyped books of the late summer, but I think it’s going to disappoint a lot of people. Don’t get me wrong, ‘Fury’ is a decent enough read. There’s lots of action and paranormal-esque instances, and it kept me reading and wanting more the entire time. But ‘Fury’ is also one of those books that you read and when you finish you ask yourself: ‘What was that?’ None of the characters are very likable, which I can understand might be the whole point, but it just doesn’t work. They have their moments, but then they also do and say things that are completely ridiculous. Characters flip-flopping all over the place is one of my pet peeves, and this happens a lot with our main character, Em.

And then there’s the furies. I didn’t really understand what they were all about. What were they doing? I guess they felt wrath or something, because what they were handing out definitely wasn’t justice. Just because some teenagers do some pretty (or in some cases, really) shitty things, it doesn’t mean they should die for it. I wish there had been more depth to the furies, maybe some chapters from their POV or something, because they basically just appeared as beautiful psycho stalkers obsessed with vengeance.

I guess I just didn’t “get” this book. I enjoyed it enough while I was reading it, but it left me with more questions than answers. I was especially disappointed by the ending. I guess it sets up the next book nicely, but I didn’t like where any of the characters had been left. If I could have felt more of a connection with the characters, if their behaviour had made more sense, I think I could have really loved this book. Instead I’m left with a book that I definitely liked, but that I feel more confused about than anything else.

The Cover: I know everyone loves it, but I don't. The girl is posed so awkwardly! The only thing borderline cool is the way the hair looks flame-y at the bottom.