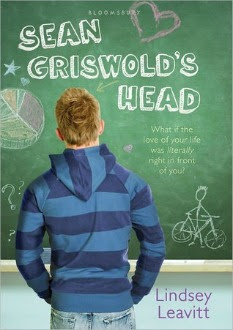 Synopsis: (from Goodreads)
According to her guidance counselor, fifteen-year-old Payton Gritas needs a focus object-an item to concentrate her emotions on. It's supposed to be something inanimate, but Payton decides to use the thing she stares at during class: Sean Griswold's head. They've been linked since third grade (Griswold-Gritas-it's an alphabetical order thing), but she's never really known him.

The focus object is intended to help Payton deal with her father's newly diagnosed multiple sclerosis. And it's working. With the help of her boy-crazy best friend Jac, Payton starts stalking-er, focusing on-Sean Griswold . . . all of him! He's cute, he shares her Seinfeld obsession (nobody else gets it!) and he may have a secret or two of his own.

My Thoughts:
This book is seriously cute!! It was refreshing to read a book with teens that reminded me of myself and my friends in high school. So often the teens portrayed in YA seem uber-mature and experienced in all matters of life, so I loved reading a book that I could relate to. When I was in Grade 9 talking to boys was a Big Deal, so reading about elements like that made the book seem particularly realistic.

One great thing about this book is how many different aspects it had to it. The central storyline of the book is Payton dealing with her father’s illness. I thought Payton’s reaction was completely understandable considering how and when she was told. Sure she was a bit immature, but she’s a young teenager. Even now at almost 25 years old I don’t know how I would react in that situation, so I found Payton’s response as a 15 year old completely justified. It was hard to watch Payton deal with her Dad’s condition and the emotions surrounding it all, but I think it was done in a very realistic way.

As for the boy aspect, how cute was Sean Griswold? He’s totally the type of guy I would have had a crush on in high school. The romance part of the book was so perfectly done, I think. I loved how even though there were relationship issues presented there wasn’t any relationship drama. There’s a fine line between the two, I suppose, but Sean was forgiving, understanding, and sweet. It’s not that he doesn’t show his emotions, and he won’t let girls walk all over him, but he’s also not willing to let stupid things come between him and Payton, which is what always seems to happen in YA. We all know that scene: the misunderstanding that leads to the characters not talking until all is revealed and they make up. Well that doesn’t happen here, and I’m so glad that Lindsey Leavitt steered clear of that cliche. What does happen is a lot more sophisticated and seemed a lot more like the disagreements that happen in real life, and I’m so glad for that.

This is a seriously sweet story that deals with boys, friendship, and, most importantly, serious family issues. If you enjoy contemporary YA this is absolutely not one to miss.

The Cover: It's definitely unique, and I love how all the chalkboard drawings relate to the story.