She Smells the Dead & Spirit Storm by E.J. Stevens 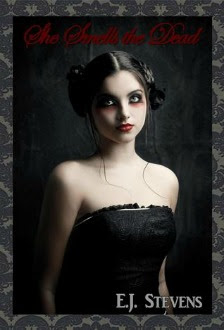 Synopsis: (from Goodreads)
It's the beginning of senior year and Yuki's psychic awareness of ghostly spirits is threatening to ruin her life. Her ability to sense spirits of the dead isn't glamorous like the ghost hunting on television.

SHE SMELLS THE DEAD.

The smell impressions are becoming stronger. Yuki is being visited in her dreams, and she suspects that her friend Calvin is involved in something strange. To make matters worse her crush on Garrett is going unrequited, Yuki's friend Emma is on a rampage against bee oppression, and Calvin Miller mysteriously disappears.

Will Yuki be able to focus her powers in time to save the lost soul who is haunting her? Meanwhile, who will save Yuki from following the spirits into the light?

My Thoughts:
Yuki is such a cute character. I really liked her and her style. She's confident in what she likes, and this shows through her narration. Calvin, from what we got to know of him, was also sweet. I would have liked to have seen more conversations happening between Calvin and Yuki instead of being told about them after the fact, though.

This book is an interesting mix of werewolf mythology, spirit animals, and Yuki's spirit power. I did really enjoy reading it, but it was so short! It didn't really leave time for a full detailed plot. Instead it was more like this was the first half of a book with the story being continued in Book 2.

The Cover: I'm not the biggest fan of the fonts or the background, but I think it's good overall. It's memorable, and that girl could totally be Yuki, especially if she were SMILING.

Find She Smells the Dead by E.J. Stevens on Goodreads & the Spirit Guide Series page. 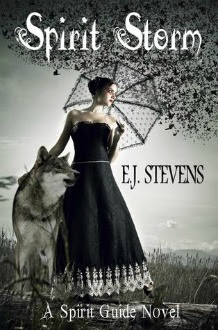 Synopsis: (from Goodreads)
"Let the spirits guide you, but never let them take you."

Spirits of the Dead are coming...

Yuki is about to face an army of lost souls on Samhain, the night of Halloween, when the spirits of the dead roam free. Yuki will need all the help she can get from her friends, but will Calvin be there for her when she needs him the most?

My Thoughts:
I found 'Spirit Storm' to be even more riveting than the first book. It felt a bit more complete as well. Again, Yuki is just such a cute character. I love her mannerisms, and how she's the biggest sweetheart ever even though her outward appearance is "out there" by most people's standards.

In the end, though, I felt like things wrapped up far too easily. There was definitely danger, but the whole book was leading to this big climactic scene that ended up being over with before I knew it. So despite the awesome action and plot it ended up being a little bit disappointing.

The Cover: I like it a lot more than the first. It's so gorgeous while still being sinister enough to show what the book is about.

Overall Impressions:
I would definitely read more by this author, especially more in this series. The books are very short, but sometimes that can be appealing. A fun and enjoyable series.