Sometimes It Happens by Lauren Barnholdt 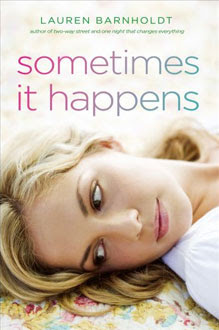 Synopsis: (from Goodreads)
On the last day of her junior year, Hannah's boyfriend Sebastian dumped her. Facing a summer of loneliness, Hannah turns to her best friend Ava for comfort. Ava does what BFFs do: she stays by Hannah's side...until it's time for Ava to head up to Maine for the summer. Also left behind is Ava's boyfriend, Noah, who's such a great guy he gets Hannah a job at the diner he waits tables at. Slowly, Hannah comes out of her funk thanks to Noah's good conversation and their fun times at the diner. But things get complicated when their friendship turns into attraction--and one night, into a passionate kiss.

The novel opens on the first day of senior year; the day Hannah is going to see Ava, Sebastian, and Noah all in one place. Over the course of the day secrets and betrayals are revealed, and alliances are broken and reformed. In the end, everyone is paired up once again, but not the way you might think...

My Thoughts:
This book would make a really good beach read. I totally flew through reading it and I didn’t even notice the time going by. I was really invested in Hannah’s character and I wished she would stand up for herself more.

The funny thing about ‘Sometimes It Happens’ is that... not much actually happens. The narrative of this book is split into two parts: one narrative takes place during the first day of senior year while the other tells about what happened during the summer prior. While I’m normally a huge fan of flashback-y split narratives (‘Stay’ by Deb Caletti and ‘Jellicoe Road’ by Melina Marchetta are examples of ones that I LOVED), I just didn’t think it was necessary in this book. The story told is actually pretty straightforward, and I don’t think changing up the straight timeline did the story any favours.

Hannah and Noah are characters who have great chemistry, so I expected to read about angsty forbidden love with longing stares, etc, etc, but... there just wasn’t much of that. The relationship between them really didn’t grow at all. Anytime something close to meaningful happened the characters just wouldn’t talk for weeks, which is why I have a big problem with what eventually happened between them. Unless ignoring a person when you actually want to talk to them and be with them counts as a relationship developing there was no lead-up to what happened, meaning I saw it as Too Much, Too Soon.

Don’t get me wrong, this is a decent enough book. As I mentioned, it’s very easy to get through, and it doesn’t require much thought, which is absolutely what you might be looking for at a particular time (I know I enjoy really light books that require zero brain power sometimes). However, without being contradictory I think you can write a chick-flick type of book while still giving it some substance. When you look at the title - “Sometimes It Happens” - and whether you reference this to mean cheating, sex, or friendship ending among many other things, it just doesn’t mean much. Sure, these things do happen, but is that the message? ‘Things happen, so oh well.’ I expected the book to share a bigger moral message than this or even give some consequences. Maybe I’m expecting too much of a simple story, but despite the fun parts of this book it mostly left me upset with the shallow message (or lack there of) that it presented.

The Cover: Meh. Kind of typical and boring. The colouring is gorgeous, though.