Beyond the Grave by Mara Purnhagen 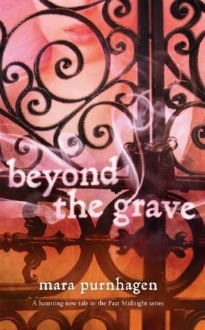 Synopsis: (from Goodreads)
A haunting new tale in the Past Midnight series...

I can’t move forward with my life until I know my demons are confined to the past...

Being Charlotte Silver, the daughter of famous paranormal investigators, means my life isn’t like that of other teenage girls. Especially after what happened to my parents. Things changed. I missed prom and deferred my big college plans. But I still have my boyfriend, Noah. He’s everything I could want—if I can figure out what’s up with him. Suddenly Noah is secretive.

I fear it has something to do with what happened to us three months ago. The bruise Noah suffered during a paranormal attack has never completely faded. Now I’ve learned Noah is researching demons. And when he disappears, it’s up to me to find him—before something else does.

My Thoughts:
I generally love the ‘Past Midnight’ series. It’s spooky ghost hunting fun without being too creepy for those of us wusses. However this volume felt a bit weak. Charlotte was so bland in ‘Beyond the Grave’. She obviously has a lot on her mind, but I don’t know why it had to make her lose a lot of her character. Really the whole book itself came together quite clumsily. There were random characters and random pieces of the puzzle, and it just didn’t flow that well. This book is definitely not as good as the first two, but I would still recommend the series itself.

The Cover:
So pretty! I love the colours and design.

Find Beyond the Grave by Mara Purnhagen on Goodreads, Book Depository, & Amazon.

Posted by Ashley @ Book Labyrinth at 6:30 AM