The Girl of Fire and Thorns by Rae Carson 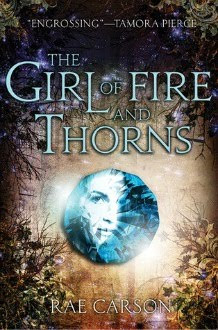 Synopsis: (from Goodreads)
Once a century, one person is chosen for greatness.

Elisa is the chosen one.

But she is also the younger of two princesses, the one who has never done anything remarkable. She can’t see how she ever will.

Now, on her sixteenth birthday, she has become the secret wife of a handsome and worldly king—a king whose country is in turmoil. A king who needs the chosen one, not a failure of a princess.

And he’s not the only one who seeks her. Savage enemies seething with dark magic are hunting her. A daring, determined revolutionary thinks she could be his people’s savior. And he looks at her in a way that no man has ever looked at her before. Soon it is not just her life, but her very heart that is at stake.

Elisa could be everything to those who need her most. If the prophecy is fulfilled. If she finds the power deep within herself. If she doesn’t die young.

Most of the chosen do.

My Thoughts:
‘The Girl of Fire and Thorns’ definitely kept my interest. I love fantasy books, but sometimes they can be a bit meandering. This is definitely not the case with this book. The Godstone (more on that later) made the plot very unique, and the storyline itself kept my attention because it kept changing, going in directions that I didn’t expect. Despite all the different settings and scenarios in this book it wasn’t disjointed at all. It was intriguing and kept me turning the pages, waiting to find out what might happen next.

Elisa is a sympathetic main character and as the book goes on she becomes someone who is amazingly strong. I absolutely loved watching her journey of self-discovery! As I mentioned, the Godstone made the story quite original. How this religious aspect was woven in with the world’s mythology and history absolutely fascinated me. It made me so interested in the world Rae Carson had created.

If you’re interested in fantasy novels which contain strong characters who live in a well developed world then ‘The Girl of Fire and Thorns’ likely will not disappoint. I thoroughly enjoyed this book and I look forward to learning more about the bearers of the Godstone and seeing where things will go in the next book.

The Cover:
Pretty good! A lot better than the original cover. The way her face is in the Godstone kind of creeps me out, though. Still, it definitely looks like a fantasy cover.

Find The Girl of Fire and Thorns by Rae Carson on Goodreads, Book Depository, & Amazon