Running From Secrets by Stephanie Void 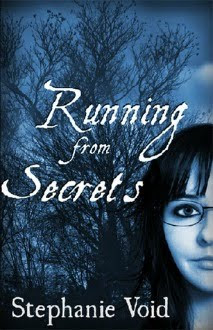 Synopsis: (from Goodreads)
Bethany has never felt as alone as she feels in Linwood—until she dreams up Chime, a woman on the run because of a magic crime she didn’t commit. The dreams get more and more urgent, so Bethany tries to banish them by writing them down, only to discover she’s stumbled into the role of unwitting controller of Chime’s world.

Chime is real here, and so is the possessed queen, minion army, mysterious professor, Vault Five, wind chimes with a secret code, child’s rhyme that can kill, the naked painting, and other things Chime’s story leads her to.

She has to fix the story without erasing Chime and her world, because if she erases Chime, she will die as well.

My Thoughts:
This was kind of a hit and miss book for me. There were parts that I really enjoyed, but other parts... not so much. The great part about this book is that it's sort of a story within a story. A book within a book. I loved that concept and I think it was executed quite well.

As a fantasy novel there is the quest aspect of the story, and that takes us into a magical land with spirits, magicians, and an enemy of the queen who has his own minion army. One part of the book that is memorable, to me at least, was the Evil Army Recruitment Questionnaire. It just made me laugh (e.g. one of the questions was "Do you like to play with fire?" and the two options were "Yes" and "Yes!").

Bethany, our main character, is quite young seeming and naive. She's hiding something that comes to light part way through the story and I just couldn't believe what I was reading. It actually really turned me off the book. I was enjoying the fantasy narrative, but then we found out about this secret she was hiding and it was absolutely insane. I can't be specific about it because it would be a major spoiler, but it just made me wonder where Bethany's brain was at, it was so ludicrous.

Some scenes in 'Running From Secrets' seemed almost rushed through, while others were well paced and thought out. Therefore sometimes I was really into the book and wanted to see where the story was going, and other times I was a little bored. Overall I thought the book came to a pretty satisfying conclusion, and I think it's worth reading for the interesting story within a story and world creation.

The Cover:
I quite like it. The spooky colouring is great, and the girl definitely looks like Bethany.

Find Running From Secrets by Stephanie Void on Goodreads. Available for Kindle or Nook.