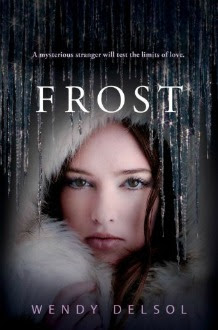 Synopsis: (from Goodreads)
After the drama of discovering that she’s a member of the Storks, a mystical order of women endowed with powerful abilities, Katla Leblanc is finally settling into her life in chilly Minnesota. In fact, the ex-California girl even hopes for a white Christmas. But Katla’s wintry wish unexpectedly turns into the snowstorm of the century, drawing the attention of Brigid, a gorgeous environmental researcher with an amazing array of fur coats and an unusual interest in Katla’s boyfriend, Jack.

My Thoughts:
I really enjoyed ‘Stork’ so I was pretty psyched to pick up ‘Frost’ and see what was up with Katla and Jack. The first thing I noticed about this book was that it’s a lot more heavy on the mythology aspect -- not in a bad way, it just comes up in the story more often, which was actually very interesting.

Let me say that Wendy Delsol sure knows how to write characters. She’s pretty amazing, because Brigid? Yah, I HATED her. I even drew a little evil demon monster face next to Brigid’s name in my review notes. When an author can make you dislike the “villain” character that much? That says something. The thing is, Brigid fit her role perfectly. She was evil and manipulative and made me want to smack her, which is ultimately kind of great, because there’s nothing worse than a cartoon-y villain who isn't really that bad.

On the other end of the spectrum we have the awesome Katla who is very strong and brave. There’s a big adventure aspect in ‘Frost’ that shows this off, and that part of the story was pretty thrilling. Then there’s Jack, who is such an appealing boyfriend character. Can we get three cheers for the nice guys? I want to see more of them in YA!

This series is so refreshing. The Norse mythology is one which isn’t written a lot about in YA, so that alone makes it original, but Wendy Delsol also knows how to write a plot and turn it all around to make it extremely entertaining. I loved reading more about Katla’s Stork abilities, and I especially enjoyed the awesome interactions she has with her fellow Storks. I definitely recommend ‘Stork’ and ‘Frost’ to those of you who haven’t picked them up yet.

The Cover:
Like it. It fits well with the Stork cover while still being unique.