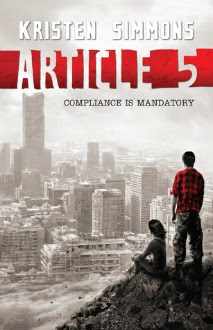 Synopsis: (from Goodreads)
New York, Los Angeles, and Washington, D.C., have been abandoned.

The Bill of Rights has been revoked, and replaced with the Moral Statutes.

Seventeen-year-old Ember Miller is old enough to remember that things weren’t always this way. Living with her rebellious single mother, it’s hard for her to forget that people weren’t always arrested for reading the wrong books or staying out after dark. It’s hard to forget that life in the United States used to be different.

Ember has perfected the art of keeping a low profile. She knows how to get the things she needs, like food stamps and hand-me-down clothes, and how to pass the random home inspections by the military. Her life is as close to peaceful as circumstances allow.

That is, until her mother is arrested for noncompliance with Article 5 of the Moral Statutes. And one of the arresting officers is none other than Chase Jennings…the only boy Ember has ever loved.

My Thoughts:
I was completely intrigued by this book since I first read the description of it, and as I started reading it I was equally enthralled by the book itself. I feel like the world that Ember, our main character, is living in requires a bit of suspension of disbelief, partially because none of the technology indicates that the book is set in the future, yet there have been wars and destruction and a whole upheaval of society based on fundamentalist morals. I would have liked a better idea of how this society came about and who actually is in charge, but if you can ignore that aspect and just go with the story I think this book is fabulous. I started reading and did not want to put it down.

Ember is very sheltered from the reality going on around her, and I felt like she was very naive about some situations and downright obtuse about others. Ember is also fiercely protective of her mother, and she’s a good person caught up in a terrible situation, so you do feel for her. I think another reason you can connect with Ember is her relationship with Chase. It’s not a spoiler to say that Chase, the boy she loved, took part in the arrest of her mother, but things are very complicated in that regard. As a reader you can figure things out about Chase that Ember hasn’t or doesn’t want to face. You can tell that Chase is the best type of boy, fiercely loyal to and in love with Ember, and this relationship shows of all of Ember’s best qualities. Basically I was completely in love with Ember and Chase’s relationship, as angsty and distant as it was at times. This was real, long blooming love trying to rekindle, and it was completely amazing to watch.

The interesting thing about this book is that I completely called the “plot twist” right from the very beginning. It just seemed obvious, and I suppose it was Ember’s hope and naivete that led her to not even consider that particular aspect. However my guessing two very important facts about the book didn’t ruin it for me. In a way it made it more exciting, wondering when Ember would figure it out, and how it would all go down. And getting to that point in the book? Crazy exciting, with tons of emotion and action along the way.

I really liked this book, partially because no one felt like a stock character to me. The characters were interesting and well developed, there was tons of action, and the book was well paced, keeping me interested throughout. Though, as I said, I would have liked some more background information on the world these characters are living in, what was described was interesting and plausible. I also adored the fact that despite the fact this is a series book it could totally stand on its own. Concrete beginning, middle, and end, with just enough promise for the future that will make you want to read on. This book is my favourite dystopian since I don’t even know when. ‘Article 5’ stands out amongst shelves of other dystopian books because of its characters and its heart.