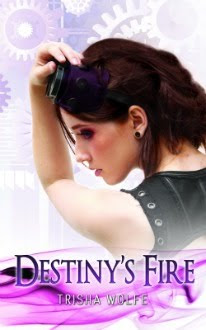 Synopsis: (from Goodreads)
It’s the year 2040, and sixteen-year-old Dez Harkly is one of the last of her kind—part of a nearly extinct race of shape-shifters descended from guardians to the Egyptian pharaohs. Her home and her secret are threatened when the Council lowers the barrier, allowing the enemy race to enter the Shythe haven.

As the Narcolym airships approach, Dez and her friends rebel against their Council and secretly train for battle. Not only is Dez wary of war and her growing affection for her best friend Jace, but she fears the change her birthday will bring. When Dez’s newfound power rockets out of control, it’s a Narcolym who could change her fate… if she can trust him.

Dez’s guarded world crumbles when she discovers why the Narcos have really come to Haven Falls, and she's forced to choose between the race who raised her and the enemy she's feared her whole life.

My Thoughts:
What I Liked:
- The world building: the mythology is incredibly interesting, and filled with tons of details (but not so many that you get overwhelmed)
- The plot itself: two mythological races against one another, a time of change and upheaval, with one girl at the centre of it all (really interesting stuff!)

What I Disliked:
- The romance. Ugh, the romance. Because seriously, where is the connection between Dez and Reese? These two have one major thing in common, they spend 1 week training together, and suddenly they're inseparable. I just didn't feel their connection at all, because there was no time for them to get to know one another. It just felt like another convenient new bad boy falls for main character story, and it kind of soured the experience of the rest of the book for me.
- I also didn't really like Dez, the main character, that much, which didn't help. I just thought she was a bit clueless and she kept making bad decisions.

Conclusion:
I think if you can get behind the romance you'll definitely appreciate this book, because it has a lot of cool aspects to it. The mythology and mixture of new technology and steampunk was really awesome, I just didn't seem to care for the characters that much at all.

The Cover:
Pretty nice; I really like the colouring.