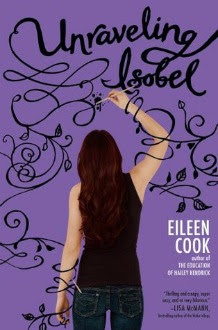 Synopsis: (from Goodreads)
Isobel’s life is falling apart. Her mom just married some guy she met on the internet only three months before, and is moving them to his sprawling, gothic mansion off the coast of nowhere. Goodbye, best friend. Goodbye, social life. Hello, icky new stepfather, crunchy granola town, and unbelievably good-looking, officially off-limits stepbrother.

But on her first night in her new home, Isobel starts to fear that it isn’t only her life that’s unraveling—her sanity might be giving way too. Because either Isobel is losing her mind, just like her artist father did before her, or she’s seeing ghosts. Either way, Isobel’s fast on her way to being the talk of the town for all the wrong reasons.

My Thoughts:
This book has a lot of great elements to it. Isobel herself was awesome and hilarious, and I absolutely adored the setting. The book takes place on a remote(ish) island where the community is tight knit, and Isobel’s newly combined family lives in a huge gothic estate featuring an attic bedroom, a ballroom, and a Beauty & the Beast style library. Also this might sound sketchy, but I was really excited about the chemistry between Isobel and her hot stepbrother Nate. I loved their relationship, but I actually thought there might be more emphasis on the whole “forbidden” angle. I realize they’re not blood related, but that’s still a bit of an awkward relationship.

Now Isobel’s mom was horrible. I hated how she doubted her own daughter and took her new husband’s word over Isobel’s all the time. I also couldn’t believe how she saw Isobel as a burden and discouraged her passion for art. What I thought the book was lacking was more about Isobel and her dad, since it was hinted at a lot, yet there wasn’t a lot of connection or interaction between them. I also expected Isobel’s art to be a bigger part of the book, especially considering the book’s cover.

'Unraveling Isobel' features some seriously spooky moments, which I wasn’t expecting (the creepy house setting definitely helped with that). I also kind of love how the paranormal aspect wasn’t really explained or confirmed; it was just sort of there. I also really loved the one ghostly twist that I didn’t see coming until one particular moment. Overall 'Unraveling Isobel' was an enjoyable read, but it doesn’t stand out in the genre as particularly special or memorable.